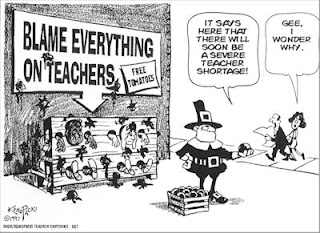 Perhaps like an alcoholic or drug addict, our children, teachers, public schools and country will have to hit rock bottom before finding a way to recover from the last 30 years of destructive corporate driven ed reform policies that are gutting our nation's public schools. The dire fiscal circumstances of local and state government is yet providing another crisis to be conveniently used as a reason to dismantle democratically elected school boards and replaced with emergency measures such as private for-profit charter operations, state by state.


Sadly, as long as the American people continue to ignore reality and buy into the well-funded propaganda campaign by politicians and business leaders who have NO ACCOUNTABILITY for the havoc they wrought on the economy, they will continue to use teachers and education as a fig leaf for their colossal failures. The same tired, rotted discourse and myths about failing schools is perpetuated in a corporate-owned media in bed with a corporate-owned Congress.


The conversation about education today is as shallow as the multiple choice tests and common core curriculum being force fed to an entire generation of students. These are the same students  who will need the critical thinking skills, imagination, creativity and resourcefulness to survive in a Third World country saddled with debt, massive economic inequality and that boasts 20% of children living in poverty.


However,  as long as the profits keep rolling in for companies like Pearson and their shareholders or the wealthy foundations who have bought and paid for both Democrats and Republicans in Congress, pre-kindergarten can be cut in the name of austerity as testing budgets explode under the new common core curriculum standards that will provide a steady stream of profits for years to come.


How much longer will the American people and its elected representatives continue to look the other way in face of the overt subjugation of those who teach our children to high anxiety, stress, and lack of job security so familiar to those in the almighty market-driven private sector where any modicum of humanity is a rare and precious commodity. HT to David Macaray, a playwright with a keen eye for  theatre of the absurd and for standing up to the powerful forces out to destroy the one profession with the ability to actually help this nation progress and succeed in the 21st Century.


John Dewey, the great education philosopher who spent much of his career explaining how education and democracy are mutually dependent on one another said,  "I believe that education is the fundamental method of social progress and reform."

Ironic isn't it -- the same politicians and business leaders who claim they want the United States to be competitive again in the world economy are actually doing everything they can to undermine that possibility while stuffing their pockets with worthless currency.

Teachers in the Crosshairs

During my twenty-odd years as a union rep in a big-time factory (a 44-acre paper mill), I had occasion to talk to over a hundred people about the things we most regretted in our lives.  It’s true.  That was our topic of discussion….regrets.  Things we hadn’t done but wish we had, things we had done but wish we hadn’t, and things we would do differently if we could go back and repeat them.  The whole gamut.
These conversations weren’t nearly as confrontational or melodramatic as they sound.  They weren’t exercises in psychodrama or brutal self-analysis so much as casual, idiosyncratic ways of passing time on swing-shift or graveyard.  They were fun.  In a highly automated, modern plant like ours you could do your job quite efficiently and still have time to swap life stories with your fellow workers.  Which is what we did.
The responses were revealing.  Nearly everyone regretted the exact same thing.  They regretted they hadn’t been better students—and not just in high school, but all the way back to elementary school.  These good people regretted that they hadn’t been more mature, that they hadn’t applied themselves more diligently, that they hadn’t paid attention in class, and that they hadn’t buckled down and done their assigned homework.  They more or less regretted their entire attitude toward education.
And while I’m not suggesting that this informal survey was in any way “conclusive,” the difference in responses between men and women was nonetheless surprising.  Virtually every man I spoke to blamed himself for his deficiency.  He readily acknowledged that in elementary school all he did was watch TV and goof off, and that by the time he reached high school he was more interested in girls and cars and sports than school work.
But while the women also regretted that they, too, hadn’t applied themselves, their assessment differed a bit from the men’s.  Women were more willing to fault their parents (particularly their mothers) for not having dogged them enough.  They were critical of their mothers for not having sufficiently “pushed” them to be good students, and for not having “had higher [academic] expectations” for them.
It didn’t seem that any of these women (most of whom were late thirties or older) were especially bitter, or were playing the martyr card, or were using their moms as scapegoats.  What they were doing was simply looking back on their lives and candidly recalling that a lack of parental-imposed motivation and discipline had hindered them academically.
In any event, here’s the kicker.  Not one of them blamed their teachers.  More than a hundred people gave reasons for not having done well (or well enough) in school, and not one of them took the easy way out and blamed the system.  Not one person said, “I was a good student, but my teachers were too incompetent to teach me, which is why I didn’t excel in school.”  They all knew that simply wasn’t true.
And yet, if we believe what we see and hear in the media, the myriad problems with our public schools—from low test scores to a 25-percent drop-out rate—are the fault of incompetent teachers and their “powerful” teachers’ union.  No one dares blame the kids or the parents.  It’s the teachers who are the villains.
With all the lies, omissions, and exaggerations that we’re regularly exposed to, many of us have become understandably cynical.  Personally, I’ve pretty much come to regard everything with a jaundiced eye.  Ever since the needle on my Indignation Dial got stuck in the “You’ve Got To Be Shitting Me” position, very little outrages me.
But this smear campaign against teachers is freakish.  It’s a new low.  What’s worse, even though it’s being driven by reactionary right-wingers, it’s not confined exclusively to the right.  Everyone is buying into it.  Self-avowed “progressives” blame the teachers.  President Obama and Secretary of Education Arne Duncan blame them.
Which is why so many teachers are reluctantly leaving the profession.  This smear campaign is actually forcing good teachers to change careers because they no longer feel it’s worth the aggravation.  Teaching is demanding enough without being accused of incompetence.  So we’re forcing them out.  Is this a great country or what?
David Macaray, a Los Angeles playwright and author (“It’s Never Been Easy: Essays on Modern Labor”), was a former union rep. He can be reached at dmacaray@earthlink.net