If you were watching golf for the past 4 days, you would see hundreds of millions spent by Exxon-Mobil to push the Common Core Corporate Standards and to convince Americans there is some educational emergency in our schools.  I guess I would be trying to change the subject at hand, too, if I were responsible for ruining another American community with a flood of dirty oil.  From Nation of Change:
________________


Cleanup Workers Collect Oil Faster than Media Collect Information
Ten days after the ExxonMobil Pegasus pipeline burst, spewing thousands of barrels of Canadian tar sands oil into the North Woods residential development in Mayflower, Arkansas, much of the oil spill has been collected, although it continues to spread slowly, seeping into wetlands and nearby Lake Conway.
Slow as the oil’s movement may be, it seems to move faster than news related to the spill, the cleanup, or ExxonMobil and the local, state, and federal agencies who keep tight control over information that, in ordinary circumstances, the public would expect to hear in a timely fashion.
Even those directly affected say they are told little, mostly generalities from ExxonMobil public relations people.  As RT.com reported April 7, “Town residents say they are being kept in the dark over compensation and the cleanup by Exxon.”
Over at Lighthousesolar.com, the sardonic view of this tight-liddedness was that the news control machine was working:
“The big news is that for the most part, only fringe online new outlets are reporting on the disaster! The federal and state government appear to be working together to keep the news of the spill from making it onto front page news.  Consider this:
“The oil spill was kept off front page news on all major new outlets.
“Exxon has asked the FAA to enforce a no-fly zone over the area, most likely to
prevent aerial photography.  The FAA did as Exxon asked.
“Local and state police are keeping the media and public away from the spill
site.
This situation continues to raise questions like these, increasingly in need of future refinement.
Who’s taking care of the 40 or so people evacuated from 22 houses close to the spill?
They seem to be pretty much taking care of themselves as far as one can tell.  Despite a wide range in their ages, and hence vulnerability to the toxic exposure they’ve suffered, there’s no word that they’re being screened by public health officials or anything like that.
Members of the Pipeliners Union 798, who work on pipelines like the one that burst, have given a check for $1,000 to each of the 22 families who were evacuated.
ExxonMobil has repeatedly promised to pay all valid claims from anyone harmed by the spill, but there’s no report that they’ve paid anyone a food allowance or anything else yet.
As of April 8, four families were allowed to return home.  One said he was glad he didn’t need to weak a gas mask on his return.
Help us speak truth to power. Donate what you can afford to support NationofChange.
Why did ExxonMobil deny it was dumping oil in nearby wetlands?

Perhaps because it didn’t do that.
ExxonMobil tweeted on April 7: “Claims that ExxonMobil is dumping oil into wetlands are completely unfounded. Cleanup in Mayflower, AR continues.”
A quick search turned up no such claim.  But there is a report on Treehugger.com that members of the Tar Sands Blockade have “heard reports” of some dumping, which RawStory tried to clarify:
“… the activist group, Tar Sands Blockade, has members on the ground in Mayflower risking arrest to show the public areas even local media have not seen, such as this "dumping ground" in the wetlands near the spill site. Tar Sands Blockade says they've heard reports that ‘because Exxon had already partially destroyed this wetland, they pumped diluted bitumen spilled in other areas here to get it all in one place and keep it out of sight of the media.’
“As RawStory notes, ‘While it’s not clear if the oil was intentionally moved into the wetland, the company says it is cleaning pavement with power washing devices, which could cause some of the oil to be pushed off neighborhood streets and into other areas.’  Whether this area has been used as a place to put oil so it can be cleaned later or it was just polluted with oil during the initial spill, it is clear the wetlands are highly contaminated and will be a massive challenge to clean.”
So for ExxonMobil to say the claims “are completely unfounded” really isn’t true?
It’s misleading.  It leads a listener to conclude that maybe the wetlands are not polluted with ExxonMobil’s highly toxic, hard to clean up tar sands oil known as Wabasca Heavy.
THAT is untrue.  An area of wetlands were clearly polluted almost as soon as the pipe ruptured.  There are pictures all over the internet, including many on the Environmental Protection Agency website. 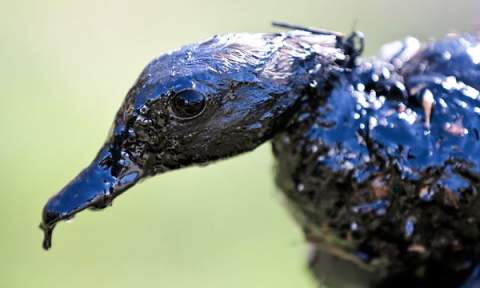 Because water is a dynamic environment, it’s probably also true that the spill is continuing to spread, however slowly.    Runoff from power washing paved areas also seems to have reached wetlands.

So the “claims” are founded, but there’s nothing but rumor to suggest that ExxonMobil did any deliberate dumping.  Whether ExxonMobil was negligent with its power washing or any other technique remains an open question.
What about Lake Conway, is there tar sands oil in Lake Conway?
The short answer is yes.
The more nuanced answer is that there’s tar sands oil from the spill in an area of Lake Conway known as the Cove, and ExxonMobil has equipment in place to keep it contained in that area.
But Lake Conway is a single hydraulic system, so the more nuances answer may not be very meaningful.
ExxonMobil seems perfectly aware of that, emphasizing in an April 8 press release that the fish are OK:
“Fish in the main body of Lake Conway have not been affected. There is a series of seven containment booms deployed in the cove to protect the main body of Lake Conway.  Tests on water samples show the main body of Lake Conway is oil-free.”
Of course it takes awhile for spilled oil to show up in fish.  And there’s nothing here about how to keep fish out of the Cove.
So is the cleanup being done well or not?  And is it almost done?
There’s no reason to think it’s not being done as well as it can be done.  There’s also no reason to think it’s an easy job or that the after effects, perhaps very minor, won’t be felt for years to come.
ExxonMobil has posted a slickly-produced “Newsletter to Residents” on the Mayflower, Arkansas, Facebook page on April 7.  The newsletter is very upbeat as it recounts progress to date and, near the end,  is quotes Gary W. Pruessing, President, ExxonMobil Pipeline Company:
“We will be working here in Mayflower and on the
site for as long as it takes to get the job done.”
The nature of oil spill cleanups is that they’re never “done.”  But at some point somebody decides to stop.
So the people whose homes lose value or whose health is affected, people like that will never be made whole?
ExxonMobil has made promises that are designed to assure people that they will be made whole.
And there is a class action lawsuit filed in federal court to give ExxonMobil another incentive to keep those promises.   The plaintiffs’ 15-page filing was made April 5, ExxonMobil has yet to answer, and no hearing is yet scheduled.
And what about the pipeline, what are they doing about that?
There is a plan to uncover a length of the pipeline that includes the rupture.  That section will be cut out, removed, and examined to determine the cause of the failure.
There’s a hitch.  There’s about 18 miles of pipeline between the two pumping stations that were used to shut of the flow after the spill was discovered.
There’s still oil in that 18 miles of pipe that will have to be drained before any pipe is removed.
Where can I get a good ten minute summary of the main issues raised by this pipeline spill?
On April 3, the PBS News Hour ran an eleven-minute segment that is reasonably comprehensive, balanced, and inconclusive.
If you listen carefully, you’ll hear the oil industry spokesman make a basic, two-part argument.  The first part of the argument (which passes without challenge or examination) is that since America needs all this tar sands oil, the safest way to ship it is by pipeline.
The second part of the argument is: Trust us.
So now I have to listen to Public Television?
No, you can listen to anything you want, even Stephen Colbert’s take on April 6.
Reader Supported News   is the Publication of Origin for this work. Permission to republish is freely granted with credit and a link back to  Reader Supported News .
at 7:15 PM