“Our rulers don’t just want exclusive control over the governance and finances of our schools, they want to control both what is taught and by whom.” — Robert D. Skeels

Deasy not given his due

An EdSource piece by the respected Carl Cohn makes the tired old case for "breaking up" Los Angeles Unified School District. Cohn lists multiple recent missteps in his case — MiSiS cRiSiS and Pearson/iPad scandal among them — but never once mentions the common denominator of all the missteps, perhaps because of EdSource's sources of funding. I addressed Cohn's lack of attribution thusly:

Mr. Cohn, how coy of you not to provide full credit to John Deasy for nearly all of the woes you enumerate above? The Broad Superintendents Academy "graduate" oversaw (read masterminded) MiSiS, iPads, and many more projects that left the district in disarray, nearly bankrupt, with little more than the ability to manage damage control rather than implement any of the forward looking projects you allude to. While some say that Deasy, and all of the Nonprofit Industrial Complex (NPIC) organizations that supported his abject tenure, were following the Andy Smarick roadmap for scuttling school districts (outlined in his "Wave of the Future" essay in the fringe-right EdNext journal), I would posit it sounds more like Broad's meddling.

Duncan given his due, for the most part

Arguably the doltish Arne Duncan is either the worst Secretary of Education in all of U.S. History, or the best corporate bagman to ever occupy the post. Honestly, he's both. The distinguished Professor Diane Ravitch excoriates the inept education chief in her response to Lyndsey Layton's ham-handed paean to Duncan. 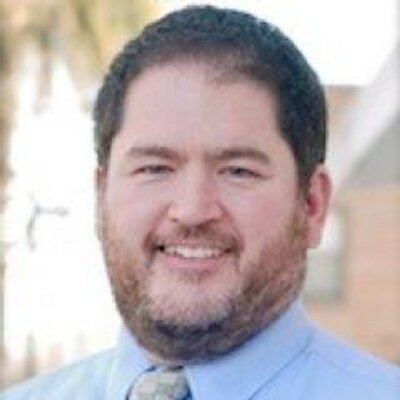 I was on Twitter the other day and noticed someone mansplainin' a teacher acquaintance of mine. The offender was none other than former Michelle Rhee minion Eric Lerum. When the teacher made the correct assertion that privately managed charter schools engage in selective enrollment, Lerum made the following bizarre statement:

.@cjnkira A frequently repeated talking pt not supported by evidence + unified enrollment system would actually help protect against that.

Incredulous at the neoliberal corporate reformer's statement I provided hard evidence from the Office of Independent Monitor (OIM):

Lerum did not respond to that tweet, presumably because his entire argument rests on ignoring facts. Neither he, nor any other corporate reformer, are able to address the issue. Instead, he kept berating my teacher friend by citing policy papers (as opposed to legitimate research) by the Center on Reinventing Public Education (CRPE), a fringe-right think-tank funded by reactionary ideologues including: The Bill & Melinda Gates Foundation, Carnegie Corporation of New York, Fund for Educational Excellence, The Joyce Foundation, Laura and John Arnold Foundation, Michael and Susan Dell Foundation, National Alliance for Public [sic] Charter Schools, Walton Family Foundation, and The Broad Foundation.

At one point Lerum stated in regards to the significant under enrollment of Students with Disabilities (SWD), particularly low incident ones, "not enough to look at #s - must also examine cause of #s." Lerum holds a Juris Doctor, and I'm working on mine, so let me make this as simple as possible for him to understand in legal terms. The ostensible reasons why the lucrative charter school industry refuses to educate SWD are not important as this is a strict liability offense. Lack of specific intent, mistake of fact, or mistake of law are no defense here. Charters do not educate every child, and as such, must be held strictly liable for their crimes. Sorry to threaten the charter sector's profits, but that's the reality, and no amount of un-juried policy papers masquerading as "research" will change that.

The teacher then cited the illustrious Professor Antonia Darder's Racism and the Charter School Movement: Unveiling the Myths.

.@cjnkira This piece is all opinion & assertion, weak on facts & evidence. Does include good rhetoric for weighted student funding though.

Lerum's maladroit response speaks volumes to his limited understanding of education, and research in general. It is no exaggeration to say that Darder is an intellectual giant in the field of education. Years ago I remember one of my mentors, Dr. John Fernandez, saying "sure you've read McClaren, Macedo, and Giroux, but you need to read Darder, she's the closest thing to Freire." Professor Darder can write a piece like she did in Truthout precisely because she's written dozens of books, and peer reviewed articles. What does Lerum have to his credit? A few poorly composed and fact-free Huffington Post pieces? Yet leave it to the corporately sponsored Lerum to question the veracity of one of the preeminent scholars of our age.

It shouldn't surprise me that a neoliberal corporate education reformer like Lerum doesn't know the difference between peer reviewed works and policy papers. Nor should I be surprised that he didn't have the good sense to avoid insulting a luminary in the field of critical pedagogy. Moreover, while he had tons of mansplainin' on hand for my female teacher friend, as soon as I confronted him with the OIM report, he went silent. His only response to me was to assert that my questioning of CRPE's funders wasn't "substantive". I would posit that his staunch defense of his corporate funders and allies speaks for itself.

Corporate charter sector mogul Refugio "Ref" Rodriguez is under investigation by a number of authorities including the LAUSD Office of Inspector General and the Los Angeles County District Attorney's Office. Keeping up with all of Rodriguez's financial scandals and possible felonies is difficult, but the following articles and resources should help:

The usual Nonprofit Industrial Complex (NPIC) suspects are hard at work in their never ending quest to bankrupt public education in Los Angeles. News that they were dissatisfied with the district's implementation of Local Control Funding Formula/Local Control Accountability Plan (LCFF) would be surprising given how they drove the entire process, except when viewed from the perspective that they never intended for LCFF to do anything but break the district. I had the following to say:

This is somewhat surprising given that UWGLA and their anti-public education CLASS "coalition" (read Eli Broad proxy groups) held so much sway over the entire LCFF process in LAUSD. For a while it looked like all the decisions for LCFF were being coined by John Deasy under the direct supervision of Elise Buik and Maria Brenes.

With more current news that a leading Broad Foundation funded group is suing the district, there's a need to create a community based opposition to the NPIC driving the entire process. Fortunately the folks at Schools Los Angeles Students Deserve are doing just that with their Instituto de Padres / Parent Institute next weekend. 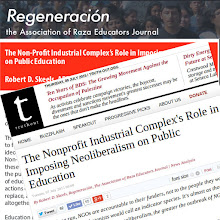 Originally written at the request of, juried by, and published in Regeneración, The Association of Raza Educators Journal, this essay on The Non-Profit Industrial Complex’s role in imposing neoliberalism on public education has been republished in Professor Henry Giroux's Truthout. Please read, discuss, and share widely.