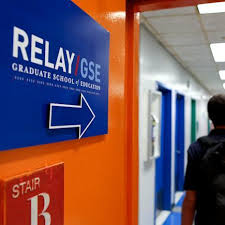 Posted by the Alliance for Philadelphia Public Schools on January 6, 2016.
This year the Philadelphia School District used training videos on classroom management from The Relay Graduate School of Education as part of its New Teacher orientation. The principals of Blaine and Kelley Elementary School (recent turnaround schools) are enrolled in Relay’s principal training program.

Relay Graduate School of Education is a teacher/principal training program based in New York and founded by people who had little experience or training in education. The school has opened a Philadelphia/Camden branch and has a partnership with Mastery Charter in the Philadelphia region. Since it appears to be extending its reach inside the Philadelphia School District we felt the need to explore Relay’s history and influence.

Kate Peterson, a graduate student at Arcadia University, has looked into Relay’s founders and programs. Her findings are posted below. We want to thank Kate for her thorough research and for allowing us to post it.

Relay Graduate School of Education is a stand-alone school based in New York City. It began as Teacher U in 2007, when Dave Levin, co-founder of KIPP Public Charter Schools, and Norman Atkins, co-founder of Uncommon Schools, decided to develop a program that would supply their charter schools and others with high-quality teachers, which they deemed as scarce. They partnered with the founder of Achievement First, Dacia Toll, to create their program. Receiving $10 million from Larry Robbins, founder of the hedge fund Glenview Capital Management and current board member of Relay, and $20 million from the non-profit The Robin Hood Foundation, the three charter school leaders partnered with Hunter College in New York to implement their program (Relay Graduate School of Education, 2015h; Barbic, 2013).


Click here to read the rest of the article.