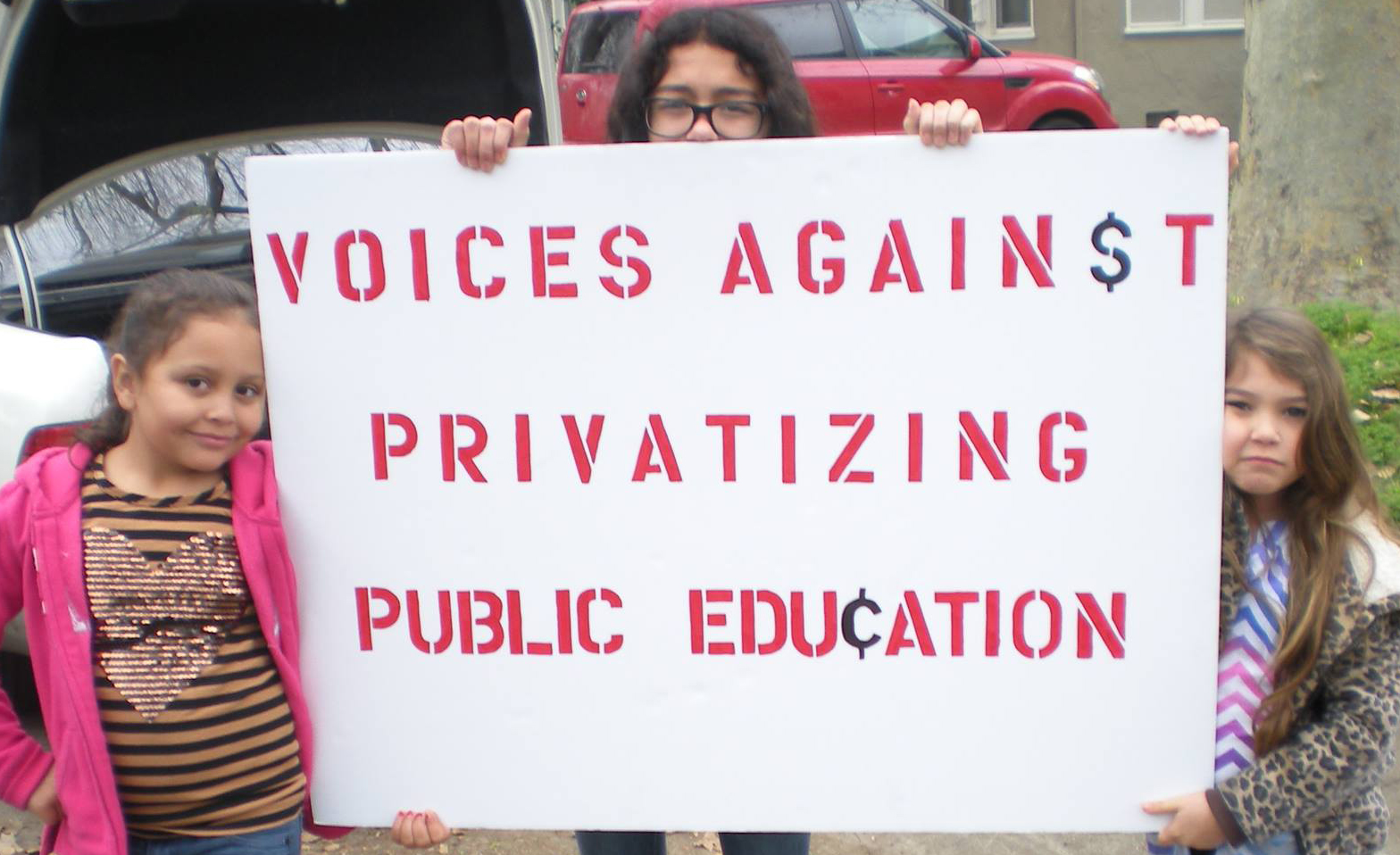 Recently VAPPE picked up a major political endorsement in the Green Party of San Diego County. In general the Green Party, unlike the Democratic Party, has been very astute on the grave dangers of charters, vouchers, and all other school privatization schemes proffered by the plutocrat class. Green Party Presidential Candidate Dr. Jill Stein is a stalwart defender of public education. The following are quotes from two different interviews, as well as a video of Dr. Stein and Kshama Sawant discussing the scourge of charter schools.

Public education is another example where there has been a complete scam [regarding privatization]—charter schools are not better than public schools—and in many cases they are far worse. They cherry-pick their students so they can show better test scores. The treasure of our public schools system has been assaulted by the process of privatization. (Phone interview on 2016 presidential race by OnTheIssues.org , Jul 6, 2015)

Unfortunately, charter schools draw down on funding for our public schools, and they siphon off the more capable students and their families. At the same time they concentrate the real social problems in the public schools, which is guaranteed to collapse our public system from within. The advantages of charters ought to be features of all public schools: family engagement, additional resources and budget, and so on. (2011 AmericansElect interview questionnaire with Jill Stein, Dec 21, 2011)

VAPPE also picked up support of the brilliant Sharon Higgins of The Perimeter Primate, Charter School Scandals, and The Broad Report. Higgins was one of the first to bring to public consciousness the fact that the largest chain of taxpayer funded charter schools in the United States is run by a shadowy religious cult — the Gülen Network. I've used Higgins research extensively in documenting the ties between Gülen friendly Los Angeles Unified School District (LAUSD) Board members elected with big money from the corporate charter school industry and their billionaire backers. Both political opportunist Monica Garcia, and charter school profiteer Refugio "Ref" Rodriguez have deep ties to the secretive Gülen religious cult.

This email was sent out to those who signed VAPPE online petition:

You have signed the petition in support of repealing the California Charter School Act of 1992.

We have officially filed the text of the initiative with the CA Attorney General's office and requested a title and summary to allow us to gather the necessary signatures to place this on the ballot for November 2016. The link to the text of the proposed intiative at the Attorney General's office can be found here at this link: https://oag.ca.gov/system/files/initiatives/pdfs/15-0114%20%28Repeal%20Charter%20Schools%29_0.pdf?

We will need to gather approximately 400K signatures.

There are volunteers working hard throughout the state to make this happen. But we will still need to raise funds to gather all the necessary signatures. Please make a donation to this campaign - every little bit will help.

Make your check out to:

This campaign recipient Committee is registered with the CA Secretary of State's Office:  http://cal-access.ss.ca.gov/Campaign/Committees/Detail.aspx?id=1378057

Please help us save our public schools from the greedy profiteers!!

Thank you for your support,

Support this movement, it represents an important united front against the billionaire's privatization project.