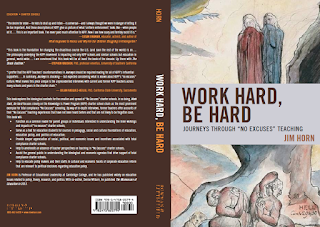 Clip from Alternet's excerpts of Work Hard, Be Hard...:


The human impacts of implementing the KIPP Model ideology come out clearly in the accounts of former “no excuses” teachers who were interviewed for this book.  Their accounts are interspersed throughout the book, for reasons that include consideration for readers’ capacity to absorb all together the psychological brutality and physical stresses that are recounted.  Those former teachers who were able to revisit some of their painful remembrances provide disturbing insights into schools where the “no excuses” credo is in practice.
When asked why she stayed at KIPP after she found out what it was like there, one former teacher talked of how school leaders had convinced her and her fellow teachers of their unique importance to the children, and how their work at KIPP was saving children who, otherwise, would be lost to the public school bureaucracies that operated for the benefit of adults, not children.  As a result, she had committed herself to carrying out the mission, regardless of what it took and regardless of personal consequences.
She noted that a lifeboat mentality among the teachers helps create a camaraderie among “team and family,” which enabled levels of self sacrifice that remain somewhat mysterious to those who are on the outside.  Understanding this phenomenon only took hold when her own life was put in jeopardy by refusing to accept her own physical limits to sustain the demands imposed by the “no excuses’ code:

I think that there is an expectation where you don’t want to let anyone down at KIPP.  They [KIPP leaders] are constantly telling you how important you are and how important this work is, and how you’re saving all these children.  And then you do find yourself thinking, oh my God, what am I doing?  You’re watching teachers drop left and right.  I mean I’m stronger than most because I was experienced, but I’m sitting there watching new teachers literally have—I’ve seen about four teachers have complete nervous breakdowns.
And then you find yourself asking, why am I doing this?  And it’s basically because I think something kicks in where you don’t want to disappoint…
….And then before you know it, you’re in there a year, you’re in there two years.  And after two years you’re considered like a veteran teacher at KIPP.  Then, finally, I just had to stop.  I mean you become physically ill.  Your body breaks down—you can’t take it anymore.  I fell asleep one day driving home from work, and I hit a car in front of me.  That’s when I woke up, and I was like, okay, this is enough.

Predictably, this kind of distress contributes to many teachers like this one eventually leaving the “no excuses” schools.  When I asked her what it was like after she left KIPP, she had this to say:

Heaven, if there is one.  It was like for the first time I got to sleep.  My body started to repair itself.  I noticed that my mind was clearing up.  I was being able to communicate effectively. I can’t explain what your body does.  It shuts down—your body shuts down.  You just become like a robot.  It took me a good six months . . . to recover from that experience.  And after six months I found myself like enjoying life again because it was absolutely miserable for two years.

The KIPP Foundation and its political and financial supporters would have us believe that there are, indeed, no excuses, and that its schools prove as much.  Are they right, and if they are right, what are the economic and human costs and benefits of such a program, and for whom?  The answers to these questions are teased out in the following pages, but for now one thing is certain: by ignoring or denying the effects of economic disadvantage and segregation on student achievement scores, supporters the KIPP mission must pressure ever harder the stressed-out KIPP personnel to corral and channel the behaviors and attitudes of KIPP children whose lives, from the beginning, have been shaped by the effects of poverty.
The failure to acknowledge and alter those economic and social disadvantages places an intense focus and weight upon what happens inside the KIPP classroom to change children so that they become, in effect, impervious to the effects of poverty.  The resulting cultural, character, and behavioral compacting process, then, creates debilitating and unsustainable pressures for teachers and students, alike.
The sacrifices required of “no excuses” teachers and students assure that large numbers will not survive in the KIPP Model schools.  In this brave new world of corporate schooling aimed to build gritty super kids taught by “rock star” teachers,  such losses have become entirely unexceptional, and they are quickly forgotten by the “no excuses” survivors who must continue to face the unrelenting demands of a system that assures one’s best is almost never good enough.  In a system where teaching experience is regularly not required or even desired, new and inexperienced teachers’ lack the professional knowledge or experience leads to acceptance of narrow, robotic learning goals that are often enforced by brutal methods.