When Diane Ravitch came out with a statement of support (satirical, was it?) for Betsy Devos as Secretary of Education, I had just finished reading Jay Mathews' column that celebrates the coalescing of his and Diane's views on charter schools.  Here's part of their ongoing dialogue between Mathews and Ravitch:


I asked Ravitch: Would you shut down charters altogether, even if some were run by dedicated educators who were giving students more than they got in their regular public schools? At this critical moment for charter schools, with Ravitch so influential on the anti-charter side, her answer is important.

“I would call a moratorium for all new charters,” Ravitch said. “All charters would be required to be financially and academically transparent.” She would ban for-profit charters. Charters would have to fill all empty seats each year, she said, so average test scores would not rise just because low-performing students had left. Charters would have to have the same demographics as regular schools in their neighborhoods, she said, with the same portion of students with disabilities and students learning English.

It's too bad that Ravitch still advocates for more special needs students suffering in the no excuses hell schools, where they receive few services if any.  And it's too bad she remains silent on the zero tolerance forms of cultural sterilization that the KIPP Model has made infamous.  Somehow she and the troglodytes of the DNC believe that more children being damaged in charters that drain public education budgets is a good thing.

Surely the selection of Betsy Devos, whose is an avid for-profit charter fan, will make the NEA/AFT/NPE/DNC embrace of "non-profit" charters sound more reasonable to the clueless sheeple who still embrace her neoliberalism.


Ms. DeVos and her husband, Dick, have been the propelling force behind the rapid expansion of charter schools in Michigan, as founders of the Great Lakes Education Project. The state has one of the most generous charter school laws in the nation, allowing an unusually large number of colleges, universities, and school districts to grant charters, with little state oversight.
An unusually high percentage of the charters — about 80 percent — are operated for profit. In Detroit, which has the nation’s second-highest share of students in charter schools, the charters have been characterized by a high churn of students, teachers, as well as the companies that operate the schools. Even groups that support charters have pushed to establish stricter oversight, but legislation to do so failed last spring, largely because of lobbying by the DeVos’ group. 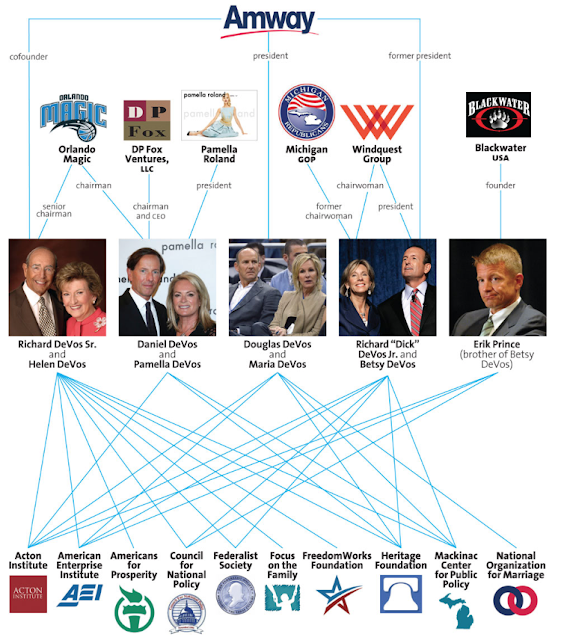