The Anti-Otis As the New White House Minister of Hate 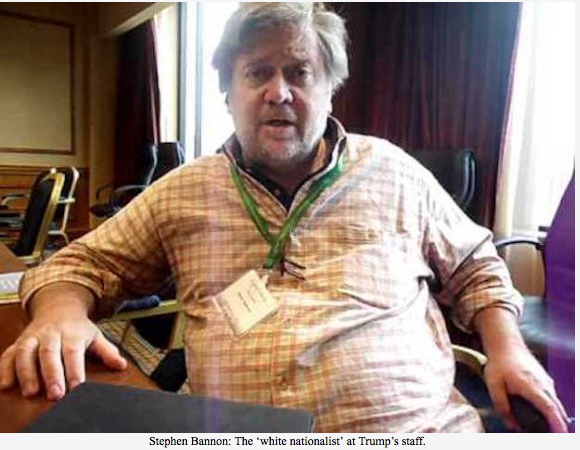 Those readers who are cool enough to be fans of the old Andy Griffith TV show will remember Otis Campbell, the lovable and good-hearted town drunk who made a habit of visiting the bootlegger, getting bombed, and turning himself in at the Mayberry jail, where he regularly locked himself into "his" own cell.

Donald Trump has just appointed the hateful and sinister Anti-Otis, Steve Bannon, as the new Chief Strategist and Chief Counsel to the President of the United States.

Now that it is sinking in that Trump has appointed the first white nationalist to a key White House position, the reaction has been swift, hard, and deep.  In the coming days, weeks, and months, alt-right media mogul, Steve Bannon, will be examined from historical and contemporary angles by journalists and bloggers, and his nazi values and policy influence will be clearly exposed at every turn.

Here is the police report that led Bannon to be charged with domestic violence 20 years ago.  According to Rachel Maddow's researchers, Bannon's wife later reported threats to their children if she appeared in court, and that is how the case ended in a dismissal. From Politico:


On Feb. 22, 1996, a complaint was filed against Bannon by the Santa Monica District Attorney’s office for misdemeanor domestic violence, battery, and dissuading a witness, according to Los Angeles County court dockets obtained by POLITICO.

The counts issued against Bannon in the domestic violence section include count 273.5(A), which according to the California Penal Code is “corporal injury resulting in a traumatic condition” on a victim who is either a spouse, former spouse, cohabitant, fiancé, partner, or mother or father of the offender’s children.

Another count listed in the court records, 136.1(B)(1), is for seeking to “prevent or dissuade another person who has been the victim of a crime or who is witness to a crime” from reporting it to authorities.

The third count, 242, was for battery, which is defined under California law as “any willful and unlawful use of force or violence upon the person of another.”

On March 12, 1996, Bannon was arraigned. He pleaded not guilty to all the counts and was released on his own recognizance.

A jury trial was called on July 31, 1996, though the trial was “trailed,” meaning it was delayed.

On Aug. 12, 1996, the case was transferred to a different court, and was called for trial. According to the court records, however, the “victim/witness” was “unable to be located.” As a result, the judge ordered the case dismissed.