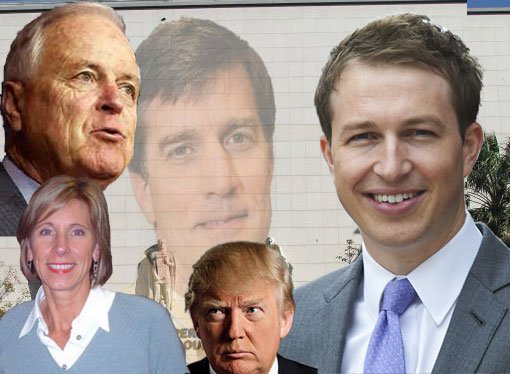 "Melvoin’s people are not ordinary constituents passing daily through LAUSD’s school house doors. These are an extremely rarefied set of LA’s ruling class, the managers and not the workers of this great city." — Sara Roos

Nick Melvoin is a right-of-center, neoliberal privatizer who is close to David F. Welch and many other anti-public-education billionaires. The list of contributors for his Los Angeles Unified School (LAUSD) Board run contains some of the most virulent reactionaries bent on destroying the public commmons, and making education an easy source of revenue for the various industries they profit from.

Fortunately, the California Court of Appeals didn't agree with the arch-reactionary trial judge in Vergara, overturned his wrongheaded holdings, and vacated his judgement: Another defeat in court for right-wing privatizer David F. Welch.

Former Teach for America, Melvoin has worked with other organizations like Teach Plus, and testified for Welch in the Vergara action. Testified, in bad faith, against the very public schools that he worked for. Laura Moser writes in Slate:

"Nick Melvoin taught at one of those high-poverty schools in Watts, Los Angeles—until he was laid off, two years in a row, a victim of LIFO. Melvoin, who is now a teacher organizer with Teach Plus and a recently declared candidate for the L.A. Unified school board, testified on behalf of the plaintiffs in Vergara and thinks that overturning the statutes contested in Vergara “would be a game changer. It’s necessary but not sufficient,” he said."

One has to ask if Melvoin was really put out by layoffs, why didn't he go to work at one of the charter corporations he is so concerned about increasing market share for? Instead of questioning a system that doesn't provide enough resources to keep public school teachers employed — hence last in, first out policies, Melvoin disingenuously held himself out as the "poster child" for a policy that he, and other Betsy DeVos acolytes, falsely frame as an issue of teacher longevity versus quality.

Melvoin's almost irrational hatred of public schools is best summed up by his desire to entirely supplant them with privately managed institutions, including charter schools. When news broke of decades of scandal by Celerity Charter Corporation and their corrupt founder, Vielka McFarlane, Melvoin wrote an Op-Ed providing political cover. McFarlane is best known for the incident where she and her administrators claimed Emmett Till deserved to die, in defense of her firing teachers over a social justice lesson plan. McFarlane's reputation for dishonesty and greed even earned her the ire of former LAUSD Superindendent Johh Deasy, an individual generally not known for taking issue with wealthy charter school executives. That Melvoin positioned himself as McFarlane's champion says much.

Melvoin would bring the entire Betsy DeVos agenda to Los Angeles. His penchant for segregation, privatization, and subsidizing the greed of the charter school industry is peerless.