The only thing public about Green Dot Public Schools, Inc. is the the word "Public" in the corporate name and, of course, the public money that is handed over to the corporate leeches that operate them, now in L. A., but coming to NYC in the fall of 2008. Green Dot was recently handed John Locke High School in Watts, and they have big plans to expand their non-profit corporate charter school model to other urban areas, where franchise managers (principals) hire, fire, and with the help of the Green Dot Home Office, make decisions that were once made by local elected school boards about public expenditures for education.

Green Dot's biggest plans, however, involve money. More money, please. Obviously, the tax-supported per pupil expenditure does not get close to where this "non-profit" corporation wants to go. Not only are the Board members constantly priming the money pump from the likes of Eli Broad, Bill Gates, and the Walton family, but school staff are urged to get in the game as well. From the Green Dot site:

As you know, Green Dot raises capital to fund start-up costs for all of its schools, including facilities costs. We ask that you not submit proposals to foundations that are on Green Dot's target list, both to prevent confusion on the part of the foundations, and also because Green Dot's collective ability to raise money is probably greater than any individual school’s or classroom’s.

Having said that, I do not want to limit anyone’s entrepreneurial spirit in going after funders, particularly if school staff has a connection that Green Dot doesn’t. I do want to encourage a spirit where we’re working together to get the most money possible out of people who are giving it away.

At some point in this space, I will try to create a list of foundations not to contact. In the meantime, it is probably easiest if you run your targets by me, and I will go over them with you.

And it doesn't stop with staff and faculty. Parents, most of them being low-income or poverty families, are required to give 35 service hours each year to the children's school. For those families where parents are working two jobs to keep the rent paid, these folks can pay off their fines, er, service with $5.00 of supplies per service hour. And there will be no shirkers, you can bet. Here's part of Parent Coordinator instructions for those would-be slacker parents:

V. Enforce consequences for parents and students who do not meet hours:
Enforce the following consequences if parent service hours have not been met--

While the Green Dot police are arm-twisting "service" from impoverished parents, there was a big Green Dot Ball this past week, the first Annual in L. A. Why? To raise money, of course, in order to expand this corporate privatization of America's public schools.

Here are a few pictures from the fun night. First, President and CEO, Steve Barr (left) with SEIU President, Andy Stern (at right, representing the L. A. service workers, don't you know), and Eli Broad (center), who gave $10 million that night.

Here's the note I got from Danielle the day after the big ball. Sorry I couldn't make it--I had to teach that night: 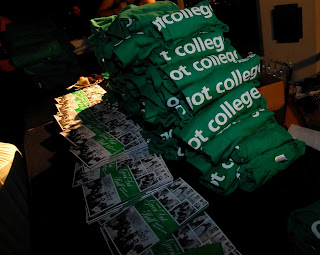