Muscular philanthropy--that's what Fred Hess calls the kind of Walton-Broad-Gates phalanx that has as one of its goals the charterizing (rhymes with cauterizing) of American public schools, beginning first in the urban schools where voucher efforts have been unsuccessful so far. Bill and Melinda, the darlings of the neoliberal set, are a bit queasy regarding vouchers, having the ongoing history that they do with the education establishment. See, too, "How Many Billionaires Does It Take to Fix a School System," NY Times Magazine, 3/9/08. 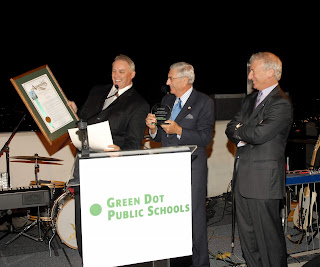 Now charter schools are a different matter, particularly as we have elements of the AFT and the head of the SEIU, Andy Stern, on board with Steve Barr, Eli Broad, and the Gates Foundation to craft a corporate-controlled version of public schools for the poor and working classes at a 20 percent savings to the taxpayer (and a 20% cost to teachers). Bill and Melinda's, in fact, gave $7.8 million to Green Dot Public Schools, Inc. last July. That's a nifty complement to the $20+ million already dished up by the Broad Foundation for the LAUSD charter takeover.

Now I don't know if you would label corporate control of the public schools as social control. I guess some would call it corporate socialism or just plain fascism. For those, however, seeking more evidence of Bill's boyish, if slightly creaky, charm applied to using private billions to buy the public good, here are a few additional links here, here, here. I wish I had time to summarize them for Dr. Anonymous, but I am going the beach in few minutes.

The saddest part of all this is that the corporate media outlets offer ample opportunity for Broad and others of his ilk to pump the KIPP charter chain gangs (Bill and Melinda gave $7.9 million to KIPP in 2004) as the modern day solution to the "negro problem." Ed Week has only a slightly more nuanced approach, as Tmao Essj points out in this blog entry from last June:

The June 13 issued of Education Week published an article on student attrition at KIPP schools, particularly the two in San Francisco and one in Oakland, that didn't bury the lede as much as it pretended it didn't exist. Somewhat surprisingly, all manner of bloggers and commenters performed the same intellectual sleight-of-hand.

The article is trapped behind a subscription wall, making it unlinkable, but Ed Week correctly reports that fewer than half of the kids that begin the Bay Area KIPP schools as 5th graders in 2003 make it to 8th grade in 2006. In the Oakland incarnation, the attrition rate climbs to 75 percent. The article ignores the fact that these lost students are overwhelmingly African-American males. The three Bay Area KIPPs lost 77, 67, and 71 percent of its Young Black Males (YBMs) during this time period.

There's more Black males on the KIPP website than in the KIPP. . . .

Admittedly, these attrition rates for KIPP in the Bay Area are not as bad (or good) as they were at the Hampton Institute in 1900 in Virginia (or the Tuskegee Institute in Alabama), when one out of five students who entered those industrial education/teacher training camps earned certificates to permit them to brainwash black children throughout the South in the "dignity of labor," but you have to admit the KIPP numbers are pretty impressive stats. The washouts, of course, have an economic function, too, providing as they do the future customers in the privately-managed prison industrial complex that the technocrats have devised to replace, yet another, civic responsibility.

You can be sure, however, that those black and brown KIPP-sters who make it through the direct instruction gauntlet are no less ready than the Hampton graduates to do, as Booker T. Washington did, the work that is offered by the overseers whose respect must be earned--repeatedly. WORK HARD, BE NICE--indeed.
at 9:29 AM