American public education has been hijacked by a bunch of know-nothing modern day Babbitts who, not unlike their namesake and his sycophantic sidekicks that Sinclair Lewis immortalized in the novel by the same name, have a scheming self-serving treachery and a blind, incessant faith in their own parochial and dumbed-down materialism that is as intellectually stimulating as a hanky full of ether. This pack of philosophical dimwits and non-curious Georges led by the likes of Bill Gates and his middle brow scribbler pal, Thomas Friedman, have a clear monopoly on the capitalist market dogma that they, themselves, have fallen prey to, along with the high priests of the Harvard Business School whose sacred book of cases never allows them to consider something that hasn't been done before, already. Part of chummy charm of this gaggle of greed merchants and marketeers is that their close-drill navel gazing never requires them to look beyond their small circle of fellow experts for reassurance that they are, doubtless, correct on all things worth considering.

In hoping to stay ahead of the Chinese in all things educational, they may have noticed, had they not been blinded by their own unfailing insights, that the Chinese would like very much to leave behind the kind of educational rigormortis that these same American corporate testocratic bullies have set in motion in the U.S. of A. in ways that threatens our economic viability, creative viability, and our political viability. 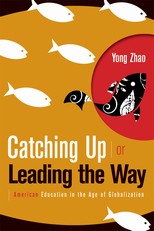 A new book to be published next month by Dr. Yong Zhao (ASCD) lays out the case. Be on the lookout for it. Here is the press release from Michigan State U., and here, once more is the link to a video that talks about some of what is in the book.

EAST LANSING, Mich. — America’s increasing reliance on standardized testing as a yardstick for educational success is a flawed policy that threatens to undermine the nation’s strengths of creativity and innovation, according to a provocative new book from a Michigan State University scholar.

By grading student success on government-set standards in a limited number of subjects such as math, reading and science, Yong Zhao argues the United States is eager to “throw away” one of its global advantages – an education that respects individual talents and does not dictate what students learn or how teachers teach.

Zhao’s book, due out in late September and published by ASCD, is called “Catching Up or Leading the Way: The Future of American Education.” He acknowledges his thesis is “diametrically opposed to the more popular view of what American education should be like in the 21st century.”

“Right now we seem to be stuck with the idea of standards as the panacea to fix all of America’s education problems,” said Zhao, University Distinguished Professor of education. “I don’t deny that the U.S. education system has problems, but I don’t feel the problems can be solved by standards and high-stakes testing. Rather, standards and high-stakes testing run the risk of ruining the advantages and great tradition of the system.”

Ironically, Zhao set out to write a book about the “repeated failures” of testing and standardization in his native China. But while Chinese officials are trying to “undo the damages” of that system, the Obama administration seems inclined to continue the limited standards-focused policy established by George W. Bush’s No Child Left Behind Act, Zhao said.

“I realized that what China wants is what America is eager to throw away,” Zhao writes in the book’s preface.

Zhao has secured millions of dollars in grant funding from U.S. and Chinese organizations to study and implement educational technology and reform. He travels frequently around the United States to speak to educational groups about the need for diverse, globally focused education. But while most educators agree with him about the need for change, Zhao said they often complain they’re stuck “teaching to the test” to meet state-mandated requirements in select subjects.

Zhao has seen the effects of national standards first-hand. Five years ago he pulled his son out of the 10th grade at a mid-Michigan public school and sent him to a New Jersey boarding school after the youngster failed to post a top writing score on a standardized test and dwelled over how to do better.

“My heart sank as he was explaining to me how he would improve,” Zhao writes of his son, who graduated from the boarding school and is now attending the University of Chicago. “The essence of his strategy was to stop being creative and imaginative.”

Zhao believes the federal government should stop endorsing standardized testing and instead reward schools for offering a diverse set of opportunities – from art to auto shop. He said accountability should be “input-based” rather than “output-based,” with schools being graded on whether they provide safe and clean facilities and a learning environment that provides global learning opportunities.

“Most importantly, we need to instill confidence – restore confidence – in our teachers and in our schools, because right now the accountability rhetoric in essence is telling us we don’t trust our educators – that they are not good enough, they are lazy, and that’s not the case.”