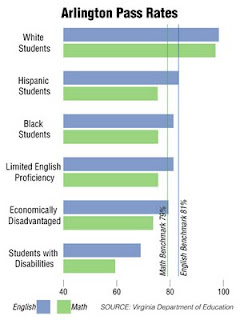 The failure chart here is a snapshot of Arlington, Virginia, but it could be Most Anywhere, USA. While corporate reformers berate public school teachers and castigate parents and abuse children with cram-down testing, the story of the return to apartheid schooling remains a non-story for the media and an unacknowledged reality for the dolts in charge of state testing programs.

"I’m very concerned about this," said Emma Violand-Sanchez, a member of the Arlington County School Board. "We need to address the achievement gap, especially with these subgroups."

Although Hispanic students met the benchmark in English, they fell behind in Math. Black students did not meet federal standards in English or Math. Students who have a limited proficiency with English did not meet the federal objectives, nor did economically disadvantaged students. Students with disabilities had the lowest pass rates, with 68 percent of the students passing the English test and 59 percent of the students passing the Math test. State officials wanted to be clear that identifying students who were struggling should not be interpreted as a criticism of the student groups.

"This is not about blaming children," said Charles Pyle, spokesman for the Virginia Department of Education. "This is about identifying where there are weaknesses to improve instruction." . . . .

How entirely and blindly pathetic. Perhaps when the fast-food corporate charter schools finally "improve instruction" by replacing all the poor public schools, the demand for accountability will disappear, as will the persistent and embarrassing reality of the death of social justice in education. Left will be children in the brainwashing academic chain gangs or the recalcitrants who will be dumped into the juvenile "justice" system. Finally, privilege will have been maintained and guaranteed for the shrinking white majority--at least until the violence starts. The future of the "democratic republic" is only as guaranteed as the control of it by white America (see the approval ratings of "rightwing terrorists").
at 8:38 AM