Duncan's BTTF (Bribe To The Flop)

Since last Fall Bush and Obama have handed over 3 trillion dollars (give or take a few hundred billion) in taxpayer money to save American business from the ruin that corporate greed and profligate behavior would have otherwise guaranteed the entire country, except for those with foreign bank accounts, of course.

In comparison, 2.5 percent of that $3 trillion, or $100 billion, went to the education bailout, and a sliver of that $100 billion (4.3% of it) has been given to the Secretary of Education to "incent" states to change their laws so that they will be in line with the Broad/Gates corporate education reform based on paying teachers for test scores, creating mammoth data surveillance systems, opening up the floodgates to "alternative" teacher preparation programs such as ABCTE and TFA (for the urban and rural poor), and expanding corporate charter chain gang schools to become the dominant model for schooling in urban America.

Even though the Dunc has been hawking the BTTF for months now, the President, himself, was on the road yesterday in Wisconsin to announce the race has really started now. Ready, set, yawn.

Not only is no one excited, but most believe that none of 4.3 percent of the 2.5% of the corporate bailout will improve education or close the achievement gap or accomplish any of the blah-blah about competitive global economies. What it will likely do is continue shrinking school curriculums into the box built by the U. S. Chamber of Commerce, weaken the teaching profession and teacher unions, make test scores even more high stakes and certainly more high profit, and solidify the education industry as the dominant voice for urban school matters in America. That's pretty good bang for your buck, or some excellent leveraging, as Bill and Eli might chuckle.

And all of it is going full steam ahead despite what the preponderance of evidence tells us about these proposals.


for example, a 14 state study out of a Stanford research center reported that 17% of charters did better than public schools, while 37% did worse. The reason that charters do no better, and frequently do worse, than public schools is that they do not provide the promised innovations, have higher turnover and less qualified staff. Also clearly emerging from the findings is that charter schools segregate by wealth and race. It is troublesome that our leaders who promised to be "evidence-based" have not based their initiatives on the evidence.

For the $300 million spent on merit pay for teachers over the last three years, Texas was hoping for a big boost in student achievement.

But it didn't happen with the now-defunct program, according to experts hired by the state.

The Texas Educator Excellence Grant, or TEEG, plan did not produce the academic improvements that proponents – including Gov. Rick Perry – hoped for when the program was launched with much fanfare in 2006, a new report from the National Center on Performance Incentives said.

"There is no systematic evidence that TEEG had an impact on student achievement gains," said researchers for Texas A&M University, Vanderbilt University and the University of Missouri.. . . .

Evaluations must be appropriate to the specific program being assessed and will be easier to design if grantees provide a "theory of action" for any proposed reform -- a logical chain of reasoning explaining how the innovation will lead to improved student learning. Evaluations should be designed before programs begin so baseline data can be collected; they should also provide short-term feedback to aid midcourse adjustments and long-term data to judge the program's impact. While standardized tests are helpful in measuring a reform's effects, evaluations should rely on multiple indicators of what students know and can do, not just a single test score, the report adds.

One way of evaluating teachers, currently the subject of intense interest and research, are value-added approaches, which typically compare a student's scores going into a grade with his or her scores coming out of it, in order to assess how much "value" a year with a particular teacher added to the student's educational experience. The report expresses concern that the department's proposed regulations place excessive emphasis on value-added approaches. Too little research has been done on these methods' validity to base high-stakes decisions about teachers on them. A student's scores may be affected by many factors other than a teacher -- his or her motivation, for example, or the amount of parental support -- and value-added techniques have not yet found a good way to account for these other elements.

Using data on 30 ABCTE teachers in Florida over two years, we found no differences in student gains in reading between students of ABCTE and non–ABCTE teachers. However, students of ABCTE teachers scored lower than their counterparts on the state math test. The difference was equal to an effect size of 0.25 and was statistically significant [approximately 10 percentage points], although the estimate varied slightly depending on how the matching was conducted and how the statistical model was specified. Limiting the sample to subgroups of teachers, such as novices or ABCTE teachers who scored high or low on certification exams (and their matched counterparts), did not change the overall conclusion either (p. 1). 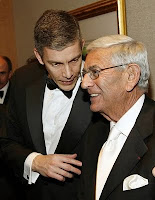 This is just a sampling of the hard data that should give pause to Duncan and Obama's capitulation to the corporate ed reform oligarchs, whose ideological agendas are driving education policy, evidence be damned. The question faced by states: is it worth it to jeopardize public schools for what amounts to chump change, just to expand the education industry and to create a new unaccountable and unregulated corporate bureaucracy to be in charge of the children we have essentially thrown away?

Arizona now has corporate prisons to house poor adult lawbreakers. Will nationalized corporate chain gang schools be the cheap solution to urban and rural poverty among those too young for prison?
at 10:22 AM