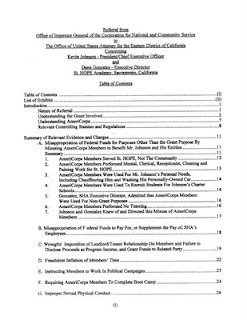 For awhile there, Kevin Johnson's St. Hope charter school kind of minority edupreneurship was just what Broad and Gates hoped to spread eastward from Sacramento to DC. That was until the Inspector General for AmeriCorps offered up a report that recommended criminal charges against Johnson (IG report on St. Hope--click Contents page for a larger view of the large list of offenses). The primary charge involved the illegal siphoning off of over $800,000 from Americorps to advance Kevin's own "educational" interests in and around Sacramento.

And somewhere between misappropriation of federal funds and the sadistic boot camps and the improper sexual physical conduct, Kevin and Michelle fell in love, so much so that Michelle became chair of damage control for Kevin, even as the plan to bring St. Hope to DC went off the rails. Kevin ended up paying back $400,000, no criminal charges were filed, Keven became mayor of Sacramento, and the Obama Administration fired Walpin, the IG who wrote the criminal referral on Kevin, who, by the way, is a round ball bud of the President. Cozy.

As long as this story dealt with stealing public money and corrupt manipulations by the Oligarchs to move the charter chess pieces around the country, no media could be bothered with the story. But now the Republicans are fanning the sex scandal and hush money angle, so the Times on both coasts are going to press on this one. Poor Kevin. Poor Michelle. The NY Times piece here.
at 6:23 PM