For Fenty to Survive, Rhee's Got to Go 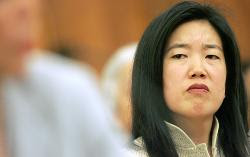 Adrian Fenty is stuck with the same problem at the city level as the President at the national level: How to rein in a chief education appointment who has been taken over and run amok by the self-appointed philanthrocapitalist gangs in charge to corporate education reform at both the city and national levels.

Sadly, the corporate media such as the Washington Post is treating the most recent crimes by Michelle Rhee as some kind of bizarre he said/she said between Councilman Vincent Gray (who offered a blistering appraisal of Rhee last Thursday) and Chancellor Rhee, herself, who thus far has depended upon her arrogance, unlimited supply of hubris, and the opinions of Eli Broad's lawyers to face this latest debacle of her own creation. If any school teacher or principal acted with the premeditated insubordination that Rhee has displayed most recently with her conspiracy to fire 266 experienced teachers, he or she would already be looking for another job. As it is, the Washington media seem to think that Vincent Gray is somehow as much to blame for the reckless, irresponsible, and law-defying behavior by Corporate Ed Reform's Poster Girl, M. Rhee. The best Valerie Strauss can do in today's WaPo is end her piece with a cutesy plea to "bring together Rhee, Gray and whoever else matters. Shame them, if you must, to end their feuding."

Before Strauss makes her final scraping bow, however, to her Editors' politics, she does make a few good points:

. . . . Rhee seems to think she can do whatever she wants because she is sure she is on the side of the angels in her reform efforts. She clearly views Gray as the defender of process rather than poor kids.

Such characterizations are not only pointless but dangerous because they only increase a polarization that is sure to end in another failed reform, which would be tragic for the nation's capital.

The more the bureaucracy doesn't trust Rhee, the more entrenched it will get, and the less it will do what she wants.

If you don't think this will happen, look at what has gone on in the District for years. With every new superintendent and every new reform policy, the folks who don't trust their leaders just dig in, waiting for the next boss to show up. That's how we got to the place we are today.

Rhee would get a lot further if she made her case to the public, explaining why she was doing what she was doing. She doesn't have to be nice about it. She just can't say one thing when something else is true. And she has done that more than once in recent months, and not only about the layoffs.

I found disturbing a recent story about Rhee by Turque, in which he quotes a few principals who said that Rhee asked at a meeting how she could regain the trust of teachers. Such a question indicates that she recognizes that having their trust is useful.

But when Turque asked her about it, she denied ever saying it. My instinct tells me that the principals did not misquote her. So why would she deny having said it? None of the possibilities is good.

And yes, Councilman Gray is the defender of process, the process on which our Constitution is based and the process upon which orderly society depends. It is called the rule of Law.
at 1:16 PM