From William Black at HuffPo:

Tom Frank's book, The Wrecking Crew explains how the Bush administration destroyed effective government and damaged our social fabric and our economy. The Obama administration has chosen to reward two of the worst leaders of Bush's crew -- Geithner and Bernanke -- with promotion and reappointment. Embracing the Wrecking Crew's most destructive members has further damaged the economy and caused increasing political and moral injury to the administration. . . .

The same could be said for Obama's education plan, which picked up right where BushCo. left off, just before the final assault on public schools and teaching, one of few remaining career choices with benefits, retirement plans, and the potential to leave the planet's people a bit better off. In fact, the corporatization of education has accelerated with the installation of Obama and Duncan as the Oligarchs' choice to continue the pillaging of America's educational institutions by corporate interests.

The Race to the Cliff provides almost $5 billion in taxpayer money for bribes that have been set aside to "incent" the crushing of collective bargaining laws, create charter laws where there aren't any, install permanent data surveillance systems in every state, mandate pay-per-score teacher pay plans, and turn over urban schooling to corporate franchises that are modeled after the KIPP dropout factories that so effectively segregate and brainwash the poor and dark-skinned who can survive the chain gang test prep and mind control measures.

Feedback, however, on the parameters for Arne's Big Bribe bucks has been harsh, so much so that the Dunc has backed off on the ramming down of the charter option to the exclusion of other attempts to fix, rather than replace or shut down, low performing schools. This is from the Final Rules on RTTT:

The Department made three noteworthy changes to the selection criteria on turning around the persistently lowest-achieving schools. First, this notice removes the restriction, proposed in the NPP, that permitted the ‘‘transformation’’ model to be used solely as a last resort. Instead, we simply specify that an LEA with more than nine persistently lowest-achieving schools may not use the transformation model for more than 50 percent of its schools (p. 59691).

This would mean, presumably, that a system with fewer than nine low-achieving schools could use the transformation model to "fix" all of them, and thus avoid the draining away of public money by the corporate charter welfare solution being jammed down by the oligarchs, Broad and Gates. There are other changes worth noting. My bolds and italics:

This last remark continues to ignore the only peer-reviewed national study on charters, the one published by CREDO at Stanford earlier this year, which shows that bad charters outnumber good ones by a margin of 2 to 1. Thirty-seven percent of charters score below the public schools, while only 17 percent score better. In 42 percent of the nation's charters, there is no significant difference in scores. Is this what Duncan's dopes mean by "perform similarly?" 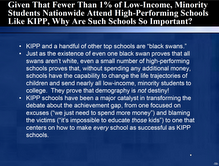 The Black Swans?
And the high quality charters? The real high flyers are the KIPP dropout factories, where the total compliance boot camp system and the psychological brainwashing scatter as many as 50-60 percent of enrollees between 5th and 8th grade--not to mention record attrition rates among teachers that no public system could sustain.

These are the black swans that are displayed for those looking for the solution to urban poverty without doing anything to end poverty. Click on the slide above to see what former hedge fund investor exec, Whitney Tilson, is pumping onto the Web, as noted in previous post by Ken Libby. The KIPP dropout factories have become the sustaining illusion and delusion for the positive psychology hypesters like Broad and Gates and the glassy-eyed drones of Martin Seligman, whose entire urban reform system is built on a house of cards that continues to ignore the grinding poverty that sustains the achievement gaps for the bottom quartile of American children whom we have deemed disposable, all the while turning over their containment and permanent segregation, er, education to the corporate plunderers and leeches who are destroying our Republic.
at 12:29 PM