The Central Falls, RI Turnaround: Fire All the Teachers

The most constant and reliable predictor of standardized test scores is the income level of student families. Central Falls, RI has lots of families in poverty, almost 3 times the state average (30.1% compared to 12%). The percentage of families with income below 50% of poverty is more than twice the state average (12.5 to 5.2 percent). And these numbers were from before the Wall Street banksters ruined us.

Central Falls has only one high school, Central Halls High, and it has been on the NCLB "Needs Improvement" list for several years now. It is one of those schools that Arne Duncan has sworn to turn around, despite the fact that he nor anyone else plans to do anything about the grinding poverty that is the primary reason for the schools' low scores to begin with. 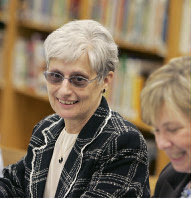 And so it is that the dope in charge, Frances Gallo, picks one of Arne's possible solutions for turnarounds. Photo from Sandor Bodo for the Providence Journal.

CENTRAL FALLS, R.I. — A plan to dismiss the entire faculty and staff of the only public high school in this small city just west of the Massachusetts border was approved Tuesday night at an emotional public meeting of the school board.

The board voted 5 to 2 to accept a plan proposed by Schools Superintendent Frances Gallo to fire the approximately 100 faculty and staff members at the chronically underperforming Central Falls High School on the last day of this school year in June.

As soon as the meeting ended, the board went into a closed session and members were not available for comment.

Dr. Gallo said during the meeting that she chose what she called a “turnaround” plan, one of four offered by the state, after the teachers’ union rejected conditions in another state plan that called for increased hours without the promise of salary increases.

“Union leadership went too far because I would not commit to monetary incentives,” Dr. Gallo said.

Teachers and union members said Dr. Gallo and the board had not bargained with them in good faith.

“We have been at the table,” Jane Sessums, president of the Central Falls Teachers Union, said at a premeeting rally at a local park attended by hundreds of teachers, students and supporters. “They have not been willing to bargain.”

Dr. Gallo said she had been instructed by the state commissioner of education, Deborah A. Gist, to choose one of the four state reform plans, which were modeled on federal recommendations and included the school’s closing. Central Falls High is one of six of the state’s lowest-achieving — the only one not in Providence — and has a four-year graduation rate of 48 percent. It has 800 students.

Dr. Gallo has 120 days to submit a more detailed plan to the state.

On Tuesday night, several hundred teachers and students, many wearing Central Falls High’s colors of red and blue, packed into the meeting, shouting at Dr. Gallo and school board members. As a board member read the names of people slated for termination, many people were crying.

Joe Travers, 44, a longtime physical education teacher, said after the vote: “They sat up there, looked us in the eye, told us we were not good enough. That’s an embarrassment.”