The corporate charter school movement in New Orleans has cooked up a great deal of PR to coincide with the fifth anniversary of Katrina, and much of it has been swallowed and regurgitated by newspapers, blogs, and television news stories, all looking for something positive to write about in the continuing, sad saga of the Big Uneasy.  NBC’s Nightly News, for instance, has gushed in at least two separate pieces this week about the charterizing of New Orleans schools, quoting a Tulane University charter advocate in one segment who notes that test scores in New Orleans have risen every year since Katrina.  That statement has some good-sounding truthiness to it, but it really calls out for a closer look.
But first let’s look at pre-Katrina, since everything since has been universally acclaimed as better than what went before.  Since 2000, the Louisiana Education Assessment Program (LEAP) has been testing all children in 4th and 8th grades in English Language Arts (ELA) and Math.  Children must pass both parts of the test to move on to the next grade, so this is truly high stakes.  Now if all the newsy talk were to be correct about how the good schools of post-Katrina have replaced the bad schools of pre-Katrina, we would expect to see more progress, or “value-added,” on LEAP tests now than before.  In fact, what we find is that the rate of test score gains, or student growth, before Katrina represents a mixed picture when compared to post-Katrina, sometimes showing fewer gains than after the storm and sometimes more.  That’s right—more gains than after Katrina.
Between 2002 and 2005 (based on numbers from the Times-Picayune), test score growth in 4th grade among all NOLA public school children was 18 points in ELA and 16 points in Math. Between 2007 to 2010 test score growth among NOLA children was 19 points in ELA and 10 points in Math.
In 8th grade between 2002 and 2005, NOLA students gained 21 points in ELA and 8 points in Math.  Between 2007 and 2010, 8th graders gained 13 points in ELA and 11 points in Math.  So the real story is not nearly so clear cut as the corporate foundations’ glossy brochures proclaim.
In 10th grade, Louisiana students take the Graduate Exit Exam (GEE).  There, the gains since Katrina are more aligned with the public relations messaging.  Before Katrina, English and Math gains were 1 point and 9 points over three years, respectively.  Since Katrina, English gains are 15 points and Math gains are at 18 points.  Signficant, indeed.
Another surprise is in store for those who believe the charter schools are clearly the panacea for urban schooling in NOLA and, therefore, appropriately destined to replace the regular public schools there.  However, whether operated by the Recovery School District or the Orleans Parish School Board, the charters are getting trounced in terms of test score growth by the regular public schools.  Based on figures from the 2010 Cowen Institute Report, the regular public schools had higher student test score growth in 8 of the 12 categories measured, for an growth advantage of exactly 2:1.  Do download the Report, and have a look for yourself on page 27. Click chart below to expand: 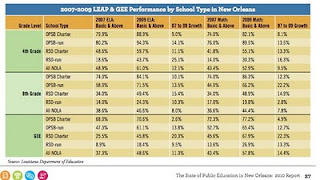 Even with these impressive gains across the board by the regular public schools, The Times-Picayune reported this week that “the remaining 20-some district-run schools have been called ‘schools of last resort’ by some critics and as a group are performing significantly worse on standardized tests than the charters.”  In fact, there are 33 RSD-run regular publics and 4 OPSB-run regular publics, for a total of 37.  And as is demonstrated in a recent report by the University of Minnesota’s Institute on Race and Poverty, the organization and operations of NOLA’s tiered school system is stacked against the poor, the immigrant, and the disabled, whose numbers are disproportionately large in the remaining public schools that still accept these children.
When I called The Times-Picayune to ask how the reporter arrived at her conclusion that these remaining public schools are “performing significantly worse,” I was lucky to have the reporter herself, Cindy Chang, answer the phone.  I thanked her for the story and told her why I was calling.  Chang responded by saying that the schools with the highest test scores are the best schools, regardless of how much progress is being made by the others whose test scores are not as high.  When I explained that the regular publics have students that the charters won’t take or have ejected, plus more special education and ELL students, she was un-swayed and most certainly unapologetic for her position. In fact, she told me that she had a story to write and hung up abruptly.  I did not get a chance to say that it is simple-minded and unfair to say that the schools with the most challenging students are worse than those that recruit the academically precocious.
The lack of special education services offered by the NOLA charters has become a scandal unto itself, with the Orleans Parish School Board regular schools now enrolling 9.3% special education students, compared with 5.2% special ed among the OPSB charter schools.  Among the Recovery School District (RSD) regular publics, the percentage of special ed students is 12.6, compared to 7.8 percent special ed student in the RSD charters. Yet even with these academic disadvantages to which may be added the fact that the regular publics must absorb ELL students and the behavioral and academic casualties from the charter schools, these “schools of last resort,” are, nonetheless, out-performing the charters in terms of student growth in 8 categories, compared to 4 for the charters. We may safely conclude, I think, that the charterites and the charter industry have much better public relations than they do pedagogy.
Why are the charters getting their butts kicked?  That’s a good research question that none of the neoliberal or conservative think tanks appear interested in thinking much about.  Could it have something to do with significant differences in experience between teachers of charters and publics?  Could it have something to do with the difference in job satisfaction between schools with benefits and some semblance of job security, as compared to schools where teachers may be fired at a moment’s notice by a CEO intent upon not providing benefits for a staff whose majority turns over every two to three years?  We don’t know, but what we do know is that, even with some KIPPs in the NOLA charter mix, the charters overall are taking a drubbing from the poor old public schools “of last resort” when it comes to growth in student test scores.
at 7:14 PM