Which Politiicans Want a Hundred Dollars From Me?

I know, a hundred bucks is a drop in the big corporate bucket, but if the 35,000+ souls who signed the Educator Roundtable petition would make a similar commitment, then we could be talking some serious contribuing power.

Here is the deal that I will make with the first ten politiicans aspiring to win or retain a U. S.  House or U. S. Senate seat who are willing to support the following positions.   An email from your office with your signature in support of these postions gets a $100 check from me.  Ready?


SCHOOL TURNAROUNDS
While only 13% of Americans surveyed would choose to close a poor-performing school in their neighborhood and reopen it as a charter school, 54% would "keep the school open with existing teachers and principal and provide comprehensive outside support."  Would you work to advance federal education policy that is consistent with these positions?

NCLB
While only 22% of Americans surveyed view No Child Left Behind as helping the public schools in their communities, 73% believe NCLB is hurting their local schools or making no difference in their local schools.  Would you work to advance education policy that is consistent with these positions?

SUPPORT FOR LOCAL PUBLIC SCHOOLS
While 23% of Americans surveyed would grade the school they know most about, the one their oldest child attends, with a C, D, or F (only 1% F), the corporate reformers who run the U. S. Department of Education have declared an education crisis that requires turning public schools upside down or privatizing them.  Even so, 77% of Americans would give the public school their oldest child attends an A or a B.  Would you work to advance education policy that is consistent with these positions?

HOW SCHOOLS COULD EARN AN "A"
While only 6% of Americans surveyed view the implementation of standardized testing/grading as the way school could earn an "A," 34 percent believe the best way for a school to earn an A is to improve teaching. Last year in 2009, when the PDK poll asked Americans if they believed in "relaxing  teacher education and certification plans so more people could qualify to teach these subjects," 71% said NO.  Would you work, then, to advance education policy that is consistent with these positions?

VIEWS ON TEACHING AND TEACHERS
In 1990, 51% of Americans surveyed would like to have a one of their children to become a teacher in the public schools. In 2010 that 67% of Americans would like to have a child "take up teaching."  Today 71% " trust and confidence in the men and women who are teaching children in the public schools."  Despite the fact that the corporate education reform machine that runs ED spends overtime bashing teachers, criticizing their professionalism, and trying to embarrass them, would you work to advance education policy that is consistent with these positions offered by the PDK/Gallup survey?

PAYING STUDENTS
The vast majority of Americans, 76% reject the notion of paying students for good behavior or grades.  Would you work to advance education policy that is consistent with these positions? 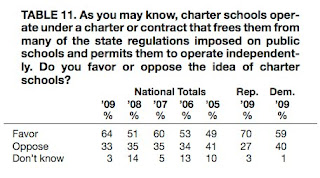 Email ThisBlogThis!Share to TwitterShare to FacebookShare to Pinterest
Labels: PDK