The NOLA corporate ed reformers have set up an important shop within Tulane University.  Their outfit is called The Cowen Institute, and they produce some mighty fine glossy reports on the New Orleans school scene.  Part of their business is make the emerging charter system in New Orleans the inevitable solution to educating New Orleans children.  In preparation for marking the 5 year anniversary of Katrina, they have prepared a special, and especially glossy, report for the media to use in writing wonderful stories about the work of the charterites in New Orleans.  From their website:


In August 2010, New Orleans and the Gulf Coast will commemorate the fifth anniversary of Hurricane Katrina.  The Cowen Institute is pleased to release The State of Public Education in New Orleans: Five Years after Hurricane Katrina to provide journalists, policymakers, community leaders, and the public with information, context, and thoughtful analyses about the reform efforts that have taken place in the K-12 public education system in the five years since the storm devastated our city.  Click here to download the report.

For this commemorative report, the Cowen Institute folks use lots of info from their 2010 Annual Report entitled 2010 State of Public Education in New Orleans.  But they don't use all of the beautiful and informative charts from the 2010 Report in their . . . Five Years after Hurricane Katrina report that is intended for "journalists, policymakers, community leaders, and the public."  For if they had, they would have included this chart from page 27 of the 2010 Annual Report, which shows clearly and incontrovertibly that the charter schools they celebrate are having their butts kicked, at a rate of 2: 1, by the remaining regular public schools when measuring student test score growth.  The regular public schools have greater growth 8 categories, compared to 4 categories where charter schools have higher gains.  Seems like an important piece of information if your intent is to inform, rather than mislead.  Click chart to enlarge it, and then click it again when it pops up to make it larger still. 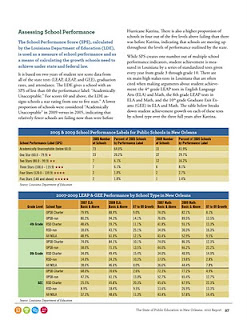