With nothing but the element of unthinking movement and uninformed force to support them, the U. S. Education Department's army for the Oligarchs is grinding to a temporary halt as citizens begin to draw lines in the sand on whether or not they want to exchange a thousand public schools each year for phony remedies that have no empirical basis to recommend them.  A page from the feds' own report in 2008 shows how much research is behind any of the strategies in the turnaround grab bag (click p. 8 to enlarge): 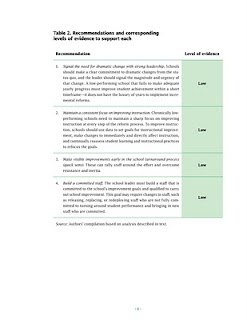 Do we want to put hundreds of schools each year in the hands of ed industry leeches and corporate foundation tax shelter experts who have nothing to recommend themselves except their glaring ignorance about education in all of its many facets?  The same people, by the way, who have destroyed free enterprise and the American economy?

Pacific High School was supposed to be converted into a charter school.

But that effort is off to an uneven start. Schools from Maine to California are starting the fall term with their overhaul plans postponed or in doubt because negotiations among federal regulators, state officials and local educators have led to delays and confusion.

In this sprawling district east of Los Angeles, for example, the authorities announced plans earlier this year to use the program to convert Pacific High, one of California’s worst-performing schools, to a charter school, involving a comprehensive makeover. . . .

The Gates/Broad team had planned to throw the Bush privatization plan into high gear when they bought, not a seat at the Obama Fed ed table, but the table, itself.  Now it looks as though their embrace of segregated, corporate testing madrasahs for the poor may be on the examination table by civil rights and human rights advocates, and everyone else with a grain of common sense.

A story today by NPR has the following piece about the shortcomings of corporate ed reform to deal with the children who need the most help, children like John Baumbach who must walk the line of one of penal pedagogy schools of the new New Orleans, where special needs just mean a quicker pace within the school to prison pipeline:

The loss of the uncle he idolized [he caught a stray bullet meant for someone else]  is just one of the challenges John faces. Before the storm, he had behavior problems at the neighborhood school he attended. John evacuated to Morgan City, La., just before the storm, and says he liked his school there.

"And you go in other neighborhoods besides urban neighborhoods, and you don't go through this," McCoy insists.

This is a common complaint — that the post-Katrina school system has relied too heavily on security guards and harsh discipline in the relentless quest to boost test scores.

The new school system is supposed to give parents choice — a menu of charters, magnet schools and traditional public schools.

But Ronald McCoy says that everywhere they turn, his grandson John's issues are neglected. A KIPP charter school, like the one Donnell Bailey attended, recruited them. But they say John never got the individual attention they were promised.

Other parents complain that New Orleans schools have ignored special education issues like John's — that led to a recent legal complaint by a civil rights group.

Samuel J. Green Charter is John's third school since Katrina. As he begins eighth grade, his future is uncertain.

John takes us into the hall of the school to show us its latest addition: The halls have narrow lines of tape along each side of the hallway. Kids must stay on the tape, even if it doubles the distance to the next classroom.

Ronald McCoy, who inspects schools for an activist group, shakes his head. "This walking the line?" he says. "I have been incarcerated, and that's where I learned about walking behind those lines and staying on the right-hand side of the wall." . . . .

There is nothing in Arne's bag of turnaround tricks that addresses the problems that are born of poverty, disability, and malignant neglect of the brown and the poor.  Until there is a plan put in place to address these underlying issues, the corporate reformers may continue their charades and parlor tricks that draw attention away from the corporate crimes, malfeasance, and lack of accountability of an economic system that is rotted from the core out.  Meanwhile, our children will continue to sacrificed into a system of miseducation that leaves them unprepared be adults of any use to themselves.
at 9:11 AM