Valerie Strauss has acquired the smoking gun that documents what we have known for a long time now: the Gates Foundation is flooding the nation's political plates with cash, along with state and local school systems, all the way down to the classroom level. The amazing document, this Gates proposal, outlines the work of a number of Gates Foundation efforts, but primarily it is aimed to provide guidance for the org that wins the grant of $3 million and change to run an outfit that was originally known as Teaching First. (That idea is now dead, since the super-secret details including the name of the outfit have now been exposed).

Here is the intro letter below, which urges secrecy in order to hide the fact that it is Gates thinking and money that are fueling the public school crucible built by the Oligarchs.  Whereas the Kochs are working from the neocon end of the plan, Gates is working back toward them from the neolib end of it.  Corporate schools without collective bargaining is the meeting point.  Here's the secret letter (click it to enlarge): 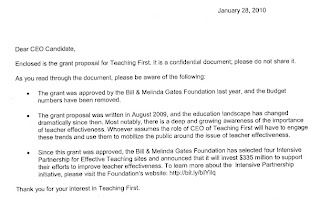 Teaching First is intended to provide the undercover influence peddling and policy/people purchasing for policies pushed by the Gates Foundation.  In short, this outfit is intended to do the dirty work without Bill and Melinda being implicated.  From p. 2: 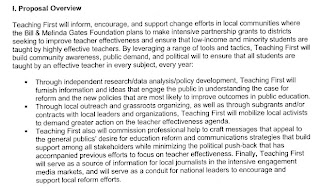 On page 3, we find the smoking gun on system official and union complicity that is intended to be properly disguised.  In addition, we see here the need delineated for continued school and teacher bashing as a necessary step in selling the reluctant public on the Gates "aggressive human capital agenda":

We find, too, in these first few pages the names of national orgs that are onboard with this cram-all-the-way-down propaganda campaign.  Amy Wilkins of Education Trust (funny name, huh?) is/was the head of the search committee to find the proper outfit to take Gates's marching orders that are laid out in this fascinating document.

And on page 4, we find out that Teaching First will keep the lid on "research" and message control, with the help, of course, of Ed Mistrust and Gates's other enterprise, Center for Dismantling Reinventing Public Education.  Also named as go-to outfits for dependable support materials for the war on teaching, NCTQ, the New Teacher Project, Harvard Education Innovation Laboratory, and CALDER:

And just how far down into the "grassroots" will Gates money go for this national effort to crush public school teachers?  All the way down to cupcakes and busrides to those "grassroots" rallies in support of the aggressive human capital agenda, it seems.  Here we see the "organizers" urged to funnel cash, confetti, and cokes all the way down to teachers' lounge level:

And we're just to page 6.  In the next installment, read clips about the "logical targets" for Teaching First organizing, and more.   In the meantime, check out Valerie's summary at WaPo.