Tennessee has been a leader in corporate education reform schooling since Gov. Lamar Alexander first pushed through the Tennessee Career Ladder program in 1984.  Then Gov. Ned McWherter made history in 1992 by putting the Sanders Model for value-added testing into state law.

And by the time "Fund-It-With-A-Grant" Phil Bredesen left the Governor's Office in 2010, the Gates and Broad Foundations had turned the concept of leveraging into the practice of elbowing, as they were essentially running education in Tennessee.  Now with billionaire oilman, Bill Haslam, as governor, and a corporate-owned Legislature in place, the Business Roundtable and the corporate foundations own education policy in the state from kindergarten through college.

On the same day in June of this year, Haslam proudly signed both of these bills into law:

Meanwhile, morale among students and educators in Tennessee's schools continues to crater as resources shrink, class sizes balloon, staffs are downsized, support services are outsourced, and tolerance disappears entirely for any educational activity not aimed to raise test scores.

Another legacy that Bredesen left Tennesseans was a new scheme to evaluate teachers based on student test scores. It will go into effect this school year, even though no one in Tennessee, including Bill Sanders, can tell how it is going to work.

And speaking of Bill Sanders, next year will mark the beginning of the third decade since value-added testing became Tennessee's preferred educational solution.   How time flies when we are having fun!

So by all means, let Tennessee parent ask the corporationists running the schools whether or not we need another decade or two of the same "reforms" that stem from the same miserable corporate reform accountability model. 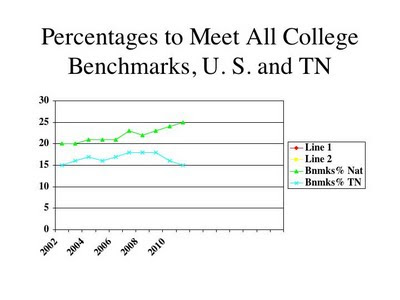