Johns Hopkins researcher, Bob Balfanz, defined a "dropout factory" as a school that graduates fewer than 60 percent of its 9th grader four years later.  Wonder what Balfanz would call a middle school that loses over 60 percent of its new students in one year!  And yet that is exactly what is happening at the KIPP testing chain gangs that are billed as the future schooling model to emulate for urban America.
Swimming pools of ink have been spilled in the corporate media to press the message that the abusive and segregated corporate eugenics camps known as KIPP, Inc. are the answer to schooling the poor and brown of urban America. KIPP's total compliance regimes and psychological sterilization techniques have had influence far beyond the 100 schools that now serve as model lockdowns for other charters and public schools, alike, all trying to keep up the race to indoctrinate, contain, and culturally neuter black and brown children who are regularly abused through screaming, ostracizing, name calling, and public embarrassment, all in the name of "achievement."
Those who do "achieve" are held up as examples that poverty doesn't matter in today's scary and inhumane business of schooling the children of poor folks.  At the same time, KIPP officials refuse to answer questions by public officials on how they intend to address the fact that they are losing almost 70 percent of their students over the first year of enrollment, all the while collecting tax dollars to run these corporate reform schools.
Meanwhile, the material conditions of these children's lives continue to deteriorate as white privileged politicians and their hedge funder money men breathe a sigh of relief that no one is clamoring to alter the conditions under which these poor children must live their lives.   No excuses, even if you live in motel room or a car.
And this, ladies and gentlemen, and Arne Duncan, is the civil rights issue of this generation--the systematic and sanctioned abuse of black and brown and poor children by a system of corporate education reform beyond redemption,
beyond the pale of decency, beyond belief in what was once our America.
But we're coming after you, Arne and Bill and Eli, and all the other shameless and self-serving fools, crooks, and charlatans who have hijacked American education.  Shame?  No, they have no shame.  They do have utter disrespect for the poor and a limitless patronizing attitude, and they see the non-privileged as pawns to be corralled and converted into human capital for their games of rancid form of capitalistic debauchery.
Below are a few fact to disspell some of the myths about the KIPP mirage.  For instance, if parents are beating down the door to get their children into KIPP, why has KIPP Indianapolis missed its enrollment targets for the past 5 years?
And how can we call a school a solution to school disaffection when it is retaining only 34 percent of its students from 5th to 6th grade?  And why won't KIPP, Inc. answer the questions put to them by Mayor's Office about this issue?  And what does the Mayor's Office plan to do about it?
The report is from October, 2010 and you may get a pdf of the entire report by emailing me.  Oh, and if you're looking for a question in this report on treatment of ELLs, don't bother--KIPP Indianapolis doesn't have any.  Hurts the brand, you know, low test scores and all.
Click any chart to enlarge it. 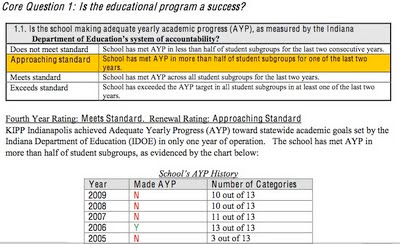 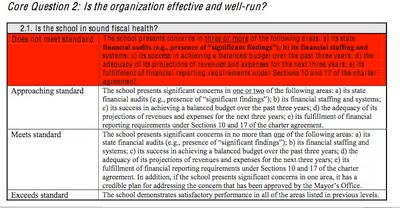 While the school has made significant improvements during the last half of 2010, their weak financial
position, presence of multiple significant findings in its SBOA audits, difficulty in balancing the budget
without relying on private loans and lines of credit, difficulty in effectively managing financial systems,
and failure to fulfill financial reporting requirements results in KIPP Indianapolis receiving a Does Not
Meet Standard for fiscal health. 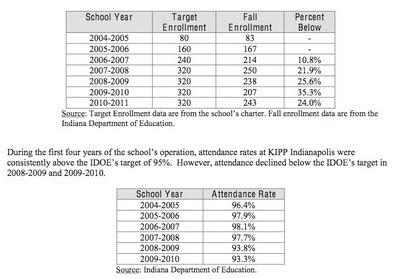 No targets have been established for student retention rates for KIPP Indianapolis.  Retention rates remained relatively stable from 2004 to 2006, but have dropped precipitously since that time.

As part of its application for charter renewal, the school did not address the issues of student enrollment, attendance, or retention – despite being explicitly instructed to do so.  Therefore, it is not possible to understand the school’s explanation of the declining retention or attendance, nor the consistent under-enrollment.


In summary, KIPP Indianapolis has been consistently under-enrolled during the past four years.  The school’s attendance rate has fallen below the target established by the IDOE for the past two academic years.  The school’s retention rate was above or near 70% for the first three years, but dropped each year since, reaching only 33.3% this past year.  Accordingly, the school receives a Does Not Meet Standard for this indicator.

If you like to have a copy of CITY OF INDIANAPOLIS, OFFICE OF THE MAYOR CHARTER SCHOOL RENEWAL REPORT, email me and I will send you along a copy.  Copies are also available through the City of Indianapolis website, though not the easiest to navigate.
at 9:34 AM