KIPP Indianapolis: Too Connected to Corporate Power to Fail

If you don't know who Whitney Tilson is, he is to KIPP corporate fundraising what Jay Mathews is to KIPP media coverage: he is the go-to guy, connected at every cash-sensitive orifice to the philanthro-oligarchs who are always looking to avoid paying federal and state taxes by giving huge bundles of cash to the segregated and corporatized reform schooling movement, i. e. charter schools.
In December 2009, Tilson had this to say about his recent visit to KIPP Indianapolis:


. . . a small percentage of our schools don't live up to KIPP's high standards (and they are VERY high).  KIPP Indianapolis was one such school.
What would the typical school district do with an underperforming school?  We don't have to guess because most big-city school systems (aka, The Blob) have nothing but underperforming schools (I'd bet my last dollar that far less than 1% of inner-city public schools in America perform at even the bottom end of the KIPP scale).  The Blob's first line of defense is denial: if you don't measure the failure, then the failure doesn't exist, right?

KIPP, in contrast, measures every school's performance using a variety of measures, including both state and national tests, and (I hope you're sitting down) not only publicizes the data internally, but posts it on its web site for the world to see (www.kipp.org/reportcard/2008).  If you check out KIPP Indianapolis’s results last year, you’ll see mediocre results.
When The Blob is confronted with evidence of its failure (thank you, NCLB!), the next line of defense is excuses ("we need more money, what can we do with "these" students, etc.").  Often, more money does flow, which simply rewards those responsible for the failure.  It's little wonder that nothing ever changes...
At KIPP Indianapolis, in contrast, there were no excuses but rather genuine accountability.  After last school year, all of the adults at the school had to re-apply for their jobs -- and only five teachers were retained, plus a new School Leader and Assistant School Leader were brought in (Estee Kelly and Emily Pelino, respectively (both TFA alums, by the way)).  Now THAT'S accountability!  I don't know which is more shocking: the fact that this occurred at a public school in America (such dramatic action is almost unheard of), or the fact that such an obvious, common sense process to turn around an underperforming school isn't automatic when ANY school isn't doing its job.
With so much turnover among the teachers, Estee and Emily had a problem: where to find nearly a dozen kick-ass new teachers?  Fortunately, The Blob came to the rescue.  Thanks to budget cuts, a number of Indianapolis public school teachers were laid off.  Guess which ones?  Not the worst teachers -- nope, that would actually put the interests of children ahead of the interests of adults, which almost never happens.  Instead, as usual (the only exception I can think of being Michelle Rhee's courageous actions in DC -- and look at the firestorm that's created!), the layoffs were purely seniority driven, which means that many Teach for America corps members we laid off, many of whom were total rock stars.  KIPP Indianapolis of course grabbed them and they are now kicking butt for KIPP.
And so it goes...

And so it goes, indeed, Mr. Tilson. Despite the butt-kicking rock stars from TFA brought in at the beginning of 2009, and despite the increased heat under the KIPP pressure cooker, things are still in turmoil at KIPP Indianapolis, according to the Mayor's Report issued in October 2010, a year after KIPP's staff cleansing.  In examining the Report, one must wonder, in fact, what it would take to lose a KIPP charter in Indianapolis.

It is beyond obvious that neglect and abuse of special education children cannot get your KIPP charter revoked in Indianapolis.  As unbelievable as it is, the KIPP Indianapolis charter was renewed for three years despite the egregious and ongoing violations already noted, as well as those below. (Click on any chart to enlarge). 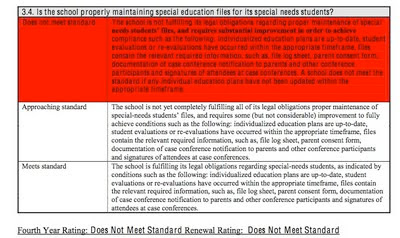 The Fourth Year Charter Review (FYCR) determined that KIPP Indianapolis was not fulfilling its legal obligations regarding the proper maintenance of special education files and required considerable improvement.   The review revealed that all twenty-nine special education files reviewed were out of compliance.  The school had problems with timeliness in updating student Individual Education Plans (IEPs), documenting notification of participation by parents in case conferences.

As a follow up to the FYCR, the Mayor’s Office contracted with external experts to again review the school’s special education files in the school’s fifth year.  At the time of the review, the school could not  produce a master roster of special education files, nor could the school locate all of the student files.  In fact, only six files were presented for review, despite twenty-nine being presented in the previous year.   Reviewers found that in April of the school’s fifth year, a number of students had yet to receive any special education services, despite having IEPs and receiving services at their previous schools.   Each of the six files reviewed were found to be out of compliance, either because IEPs were outdated, testing had not been completed, or case conferences had not been conducted.   Reviewers attributed the serious deficiencies to inadequate staffing and capacity at the school.   Two general education teachers working under emergency permits were tasked with managing the special education program, in addition to their regular, full class load.   The school contracted with an outside vendor to manage compliance in the area of special education, however the two teachers tasked with managing the program internally reported they did not have time or capacity to assist the outside vendor in managing file maintenance, nor could they meet the vendor’s deadlines for providing information.   A member of the board had been assigned to oversee special education compliance in February of the school’s fifth year, despite having only joined the board in January.

A subsequent file review was conducted in the school’s sixth year of operation as a follow up to the previous two reviews.  Twenty-eight files were presented for review.  Reviewers found that case conferences were not being conducted in a timely manner and that files were significantly disorganized – for example many files contained multiple drafts and copies of IEPs, making it difficult to discern which version was the official IEP being used by the school.  Additionally, the initiation and duration of services was not being recorded appropriately in a number of files.  Parental notification was not consistently recorded or documented and in some cases, parents had not yet signed student’s IEPs.   Finally, reviewers found that the files contained student information assumingly meant to be stored in enrollment records, such as birth certificates, transportation forms, free and reduced lunch applications and school cell phone policies.

In their application for renewal, the school’s new board provided evidence that it has engaged in sweeping changes to its program.  It indicated that an outside law firm has been contracted to provide file auditing services, program design and implementation support, and monthly check-ins to ensure program effectiveness.  Additionally, the school has hired a part-time school psychologist to oversee the program internally and improve documentation.  Two full-time special education teachers have also been hired to increase capacity.


And despite Whitney Tilson's claim of transparency regarding KIPP test scores, it is obvious that the new rock stars only test in the subjects they choose to test in.  Why didn't they test in Language in 2010?  Let the Report speak (my bolds):


The Mayor’s Office retained a team of experts to again conduct a review in the school’s sixth year of operation.  The sixth year team found while standardized and classroom assessments were used frequently, assessments focused primarily on student recall and on preparation for ISTEP+ examinations.  In its regular oversight of the school, the Mayor’s Office has determined that KIPP Indianapolis failed to properly administer the Northwest Evaluation Association MAP test, as required by the charter agreement.  The school properly administered the test in Reading and Math, however failed to test students in Language.  As explanation, the former school leader stated they were unaware Language was a requirement, despite the school administering all three subjects for the previous five academic years. Therefore, the school was significantly limited in their ability to use student performance data to inform their Language curriculum without the MAP results.

And how about the deployment of those rock stars brought in to rescue the KIPP brand in Indianapolis? 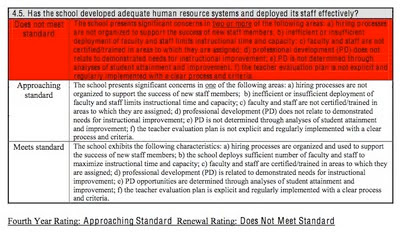 The Fourth Year Charter Review (FYCR) found that KIPP Indianapolis was approaching the standard of developing an adequate human resources system and deploying its staff effectively. While there was an explicit hiring process, designed by the CEO/Principal, staff were not appropriately certified in the instructional areas they’d been assigned. At the time of the review, KIPP was found to have a sufficient number of staff, deployed effectively and creatively.

Just prior to the fifth year of operation, the majority of staff at KIPP had been terminated or resigned, including the building principal. The school began its fifth year with a newly constituted staff.  Mid-year, the founding CEO resigned and two teachers were promoted to be co-leaders.  The school hired a new business manager, as well.

As a follow up to the FYCR, the Mayor’s Office retained a team of outside experts to evaluate the school’s performance in its fifth year of operation.   Evidence collected during the follow up visit suggested that a high number of staff were assigned to teach in areas for which they were not appropriately licensed.  The Mayor’s Office oversight systems finding that a number of staff were working under emergency permits that were set to expire, with no credible plan to resolve the issue were confirmed by the review team.  Additionally, the team found no process for mentorship of new staff.  In focus groups, teachers reported that human resource issues were the most significant challenge facing the school.  Teachers also reported feeling that professional development activities were inadequate and redundant.   Reviewers concluded that the teacher evaluation system was inconsistent and lacked constructive feedback for staff.

The Mayor’s Office retained a team of external reviewers to conduct an additional site visit in the school’s sixth year of operation.  The team found that again, the school had experienced significant turnover and began its sixth year with a largely brand new teaching staff.   The majority of teachers hired for the sixth year were members of Teach for America, who the site team noted brought considerable competence and skill to the school.  Additionally, the team found that a formal system for teacher evaluation did not exist within the school.  In regular oversight of the school, the Mayor’s Office determined that teachers in the sixth year were still being assigned to areas for which they were not appropriately licensed.  In some instances, the teachers were permitted to teach without any license or previous experience as a classroom teacher.

And so while Arne Duncan is trying to assure that America's public school teachers are evaluated every year using student test scores, with promotion, tenure and firing on the line, these clowns at KIPP don't even have a teacher evaluation system, even as they administer the state tests only in the subjects they prefer to test.

If you would like a copy of the full report, email me.