Why the Reform Schoolers Will Never Mention "The Children Left Behind"

When UNICEF published last December the international rankings on children living in poverty "The Children Left Behind," neither the New York Times nor the Washington Post, or any other major American newspaper, carried a story on it.  The closest the Times came was a tepid and cursory note by opinionator Charles Blow who could only manage to suggest that we should not make the situation any worse than it is.  For the United States, the richest nation on Planet Earth, Blow's hope could, indeed, be realized, since we already occupy the bottom spot in at least half the categories that Report measures.


As Larry Cuban pointed out this past weekend in a piece posted by Valerie Strauss, international comparisons are only of interest to corporate reform schoolers or to the corporate media when the scores can be used to label our public schools and teachers as failures in the international test score competitions.  In looking at the stunning poverty standings of American children in the UNICEF report, it is surprising that the U.S. does not do worse on international tests, since the correlation between poverty and test scores is direct and unassailable.  (In fact, we know that without the bottom quintile of test takers, which is comprised of America's poor, our scores would right up there with the highest flying developed nations.
And so it is in the corporate reform schoolers' best interest to keep attention away from the subject of impoverished children in America.  To acknowledge the problem of poor housing, poor health, poor nutrition, all of which are actually worse than the UNICEF report indicates (no data after 2008 Wall Street heist), we as a people might be moved to do something about this national shame.  This would require the oligarchs and their corporations to pay taxes, and it would require, too, an acknowledgement that the larger factors influencing student test scores are beyond the school room.  This realization, if widespread, could threaten the stranglehold of the post-partisan corporate reform school agenda of privatization, corporate welfare, destruction of the teaching profession, and the inexpensive segregation and behavioral containment of the poor.
Below, then, are some key pages from the UNICEF report released last November.  Please note that this Report represents a pragmatic comparison of where nations stand in terms of their own capacity to improve the lot of their impoverished children as measured against each country's median levels of well-being.
The longer the privileged continue to ignore the facts presented by this Report, the more expensive their eventual remedies will become, in dollars, in social disturbance, and in blood.
Please read this excerpted section of the Introduction in order to fully appreciate the avoidable horrors that the charts below present (click on any chart to make it larger, and then click on the chart that pops up).

Introduction
This Report Card presents a first overview of inequalities in child well-being for 24 of the world’s  richest countries.
Three dimensions of inequality are examined: material well-being, education, and health. In each case and for each country, the question asked is ‘how far behind are children being allowed to fall?’
Figure 1a summarizes the results. Within the limitations of the available data, it represents an overview of how well the world’s developed nations are living up to the ideal of  ‘no child left behind’.
Figure 1b presents the same data from a different perspective, showing each nation’s performance in relation to the average for the nations of the OECD as a whole.
Both charts show that a small group of countries – Denmark, Finland, the Netherlands, and Switzerland – are leading the way in promoting equality in children’s well-being. Greece, Italy and the United States, on the other hand, are allowing children to fall furthest behind.
Why inequality matters
The increase in inequality over the last three decades – its economic causes, its social costs, its possible remedies – is the subject of considerable debate in OECD countries today.i On the one hand it is argued that, after a certain level of economic development has been achieved, greater equality “would increase the well-being and quality of life for all”.ii On the other, it is maintained that inequality is a justifiable reflection of differences in ability and effort and provides incentives for further progress in all fields of human endeavour.
This is an important debate. But it is not one that affects the premise of this report.
The idea that inequality is justified as a reflection of differences in merit cannot reasonably be applied to children. Few would deny that children’s early circumstances are beyond their own control. Or that those early circumstances have a profound effect on their present lives and future prospects. Or that growing up in poverty incurs a substantially higher risk of lower standards of health, of reduced cognitive development, of underachievement at school, of lower skills and aspirations, and eventually of lower adult earnings, so helping to perpetuate disadvantage from one generation to the next.
None of this is the fault of the child.
Second, the question being asked here – ‘how far behind are children being allowed to fall?’ – requires a measure not of overall inequality but of inequality at the bottom end of the distribution.
In other words, the metric used is not the distance between the top and the bottom but between the median and the bottom. The median level of child well-being – whether in material goods, educational outcomes, or level of health – represents what is considered normal in a given society and falling behind that median by more than a certain degree carries a risk of social exclusion. Today, ‘bottom-end inequality’ is no longer a concern only of the political left. In the United Kingdom, for example, a Conservative Prime Minister has argued that “We should focus on closing the gap between the bottom and the middle not because that is the easy thing to do, but because focusing on those who do not have the chance of a good life is the most important thing to do.”
That ‘gap between the bottom and the middle’ is the focus of Report Card 9 . . . .(p. 9). 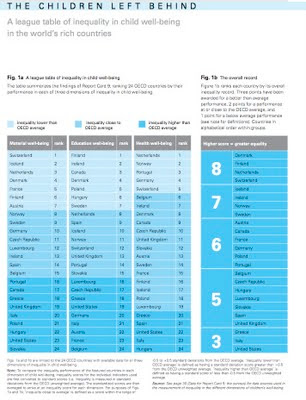 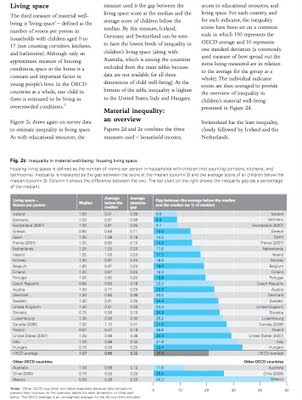 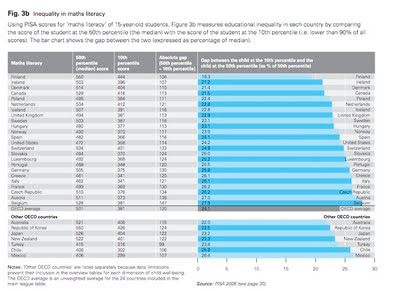 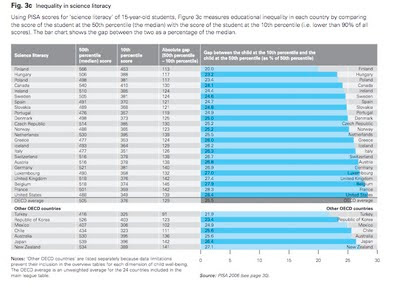