Yesterday Ed Week published a sad gloss on Save Our Schools, which has gone from a fire-breathing operation in 2011 to a small band of conventional conventioneers working under the non-coordination of corporate VP, Bob George.

And as may be expected, Bob George is mentioned prominently in the Ed Week piece, even though the term "conflict of interest" does not appear beside his name.  For those who have not been following the controversy surrounding Corporate Bob's role in SOS, Bob George is the Senior VP for Catapult Learning who has carried the checkbook for SOS and "coordinated" the online meetings with other bedazzled members of the SOS Steering Committee, most of whom still view Bob George's protection as more important than the organization they, otherwise, pour out their blood, sweat, and tears to protect.

Stephen Sawchuck, who wrote the piece for Ed Week, tiptoes around the issue of having a head of a leading edu-corp, Catapult Learning, making decisions about the direction of a group ostensibly aimed to stem corporate control of public education. And to Bob George's credit, he does finally break the silence on his corporate role with this:


Another point of contention appears to be who should be permitted to help lead the group. Mr. George, a vice president of Catapult Learning, a private tutoring company, came under fire for that affiliation given SOS' criticism of the influence of for-profit corporations in education.

Mr. George said that he was upfront about that connection with his SOS colleagues and has worked only with private, not public, schools in his position.

It's just too bad that George's statement is completely false, if we are to believe the Bob George resume that appears in a 58-page application for some of that sweet, sweet federal money approved under Section 1003 (g) School Improvement Grants to assist in the corporatization of public schools.  In fact, George is listed as "Responsible for all Catapult Learning and Education Station NCLB, Traditional In School Programs" before his duties in the non-public school realm (see p. 49):

Mr. Sawchuck at Ed Week would be well advised to do a little fact checking before he goes to press next time.  Indeed, Sawchuck characterizes Catapult Learning as a tutoring company, when, in fact, they have emerged as one of the central players of the ed industry, having gobbled up Literacy First in 2011 and more recently partnered with Teachscape on RTTT school "turnarounds."  And Catapult is gearing up to be a leader in the professional development bonanza that will accompany the planned Common Core rollout if Bill Gates gets his way.
If Bob George did not know there was a conflict of interest involved with his running SOS, why would he make up such an outrageous lie about his non-involvement in his company's predation of the public coffers to support his corporation?  From p. 26 of the Catapult's Michigan SIG Application: 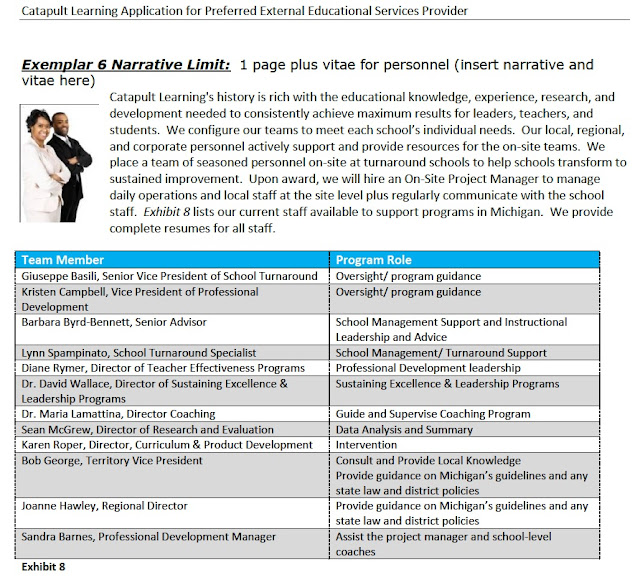