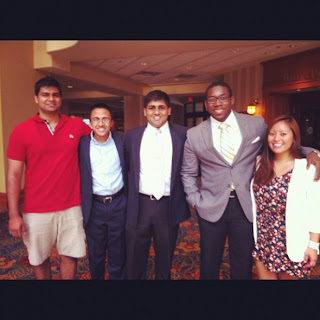 Blogger Nikhil Goyal Common Core and Race to the Top are destructive.

Today, I had a fabulous time at the Save Our Schools Convention in Washington D.C.
I left my house at 7 AM sharp, hopped on a 8:45 flight from J.F.K., and arrived in D.C. a little more than a hour later.
I spent the morning on a Student Voice panel chatting about how students are crusading for a stake in education policy, the specifications of my book, and specific alternatives to destructive policies, like the Common Core Standards and Race to the Top. At times, the conversation became heated, but they’re often absolutely necessary.
Later, Barry Lane, internationally known author and speaker from Vermont, filmed myself and a few other students for his upcoming documentary on the state of education. Later, he took us all out for lunch, which was very kind of him.
At the conference, many of my Facebook and Twitter friends came to life. It was great to finally meet Deborah Meier, Michael Klonsky, Becky Smith, Susan DuFresne, Ceresta Smith, Stephanie Rivera, Marvin Matthew, Arnold Dodge, Anthony Cody, Bob Schaeffer, Kenneth Bernstein, and Jo Napolitano.
I was also featured in a piece by Jo Napolitano of Newsday: “In D.C., Save Our Schools eyes education policy”


Nikhil Goyal, 17, who will be a senior at Syosset High School when school starts Sept. 4, will serve on a student panel that meets Saturday. He said he favors project-based learning, an end to high-stakes testing and the molding of an individual’s education around his or her passions.
” ‘Accountability’ is a code for punishment,” he said.