First published on The Daily Censored on August 5, 2012.

"This increasingly well-rooted network provides the Gulen Movement with daily access to the minds of over 45,000 students, and yearly access to hundreds of millions of hard-earned tax dollars." — Sharon Higgins 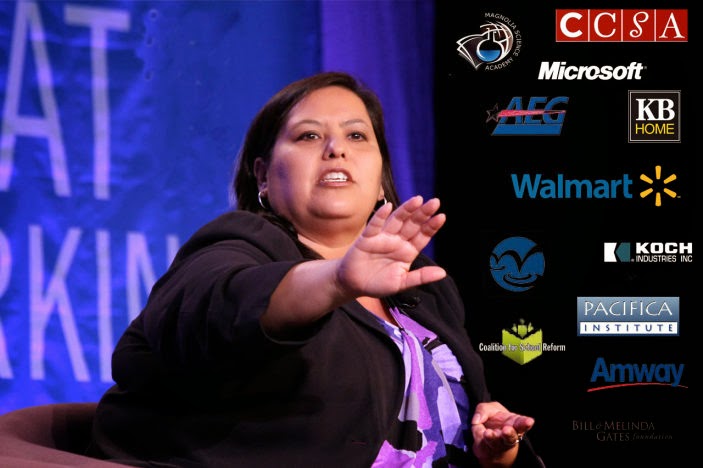 Charter schools are privately managed entities with negligible oversight, but funded with public money. The somewhat secretive Gülenist Islamic sect, named after charismatic Turkish Imam Fethullah Gülen, runs more charter schools than any other charter school chain in the United States. While there's nothing wrong with privately financed religious schools, it's problematic at best that public funds are being used to fund religious charter chains.

The individual most responsible for the proliferation of Gülen Charter Schools in LAUSD is the Board President herself, Mónica García. García's ties to the Gülenists are long-standing, and she is a tenacious advocate on their behalf. She is speaking at the Gülenist Pacifica Institute in September 2012 regarding her prominent role in corporate education reform and the unprecedented privatization of LAUSD under her neoliberal reign. The Pacifica Institute ran into controversy last year, when Armenian groups protested the organization's ties to Turkish groups denying the 1915-1918 Armenian genocide. That García chooses to be so insensitive to the considerable Armenian population in her school district is most likely attributable to the fact that there are no Armenian organizations managing large chains of lucrative charter schools in LAUSD.

Advocating for the Gülenist movement and speaking at their events have paid handsome dividends for García. In addition to helping proliferate more privately managed charters schools, the Gülenists have been very generous donors to García's political coffers. García, who raised more than $100,000 in just two months for her 2013 reelection bid, counts several Gülenist operatives among her contributors. Suleyman Bahceci, CEO of Magnolia Charter Corporation, donated $250, as did Varol Gurler, Magnolia's CAO. The Pacifica Institute's Director, Ferdi Mesut Ates, chipped in $100. Pacifica's Ilker Yildiz contributed likewise. Undoubtedly, García will continue to rake in cash from the Gülenist machine, as she has from most of the lucrative corporate charter chains. In an ethical education environment, donations from corporate charters to district board members that have the power to grant them their charters and give them choice facilities would be considered a conflict of interest.

Corporate charter school magnate Yvone Chan also recently donated to García's efforts to capture a third term as a LAUSD Trustee. Milken Educator Award winner Chan, despite a vested interest in the charter school industry, is on the California State Board of Education (SBOE). Like García, Chan has a long and rewarding history with the Gülen Charter Movement. In fact, she made sure that she and her other SBOE members granted Magnolia its Statewide Benefit Charter because:

Yvonne Chan had been on a free, Gulenist-guided trip to Turkey courtesy of the Pacifica Institute in one of the years just prior.

Incidentally, California isn't the only state where the Gülen "leaders lavish gifts and dinners on" politicians.

The Gülen Movement and their ubiquitous Gülen charter schools loom so large on the American education landscape that CBS' 60 Minuntes devoted a full length segment entitled: U.S. charter schools tied to powerful Turkish imam to this phenomenon of school privatization.

What's important here isn't which kind of religious group runs these schools, but that public funds are being used to support schools having overarching political and religious agendas like the Gülenist do. This is no different than the right-wing Milton Friedman inspired capitalism indoctrination American Indian Public Charter Schools and Green Dot Public Schools push on their hapless pupils. The former actually requires their charter school students to make daily pledges to our abject political economy. Nor is it any different than the charter school chain that teaches its students that Emmett Till's brutal murder was a just desert for what they termed his "sexual harassment." The selfsame Celerity Charter Chain pushes a "post-racial curriculum" that ignores institutional racism in favor of students self-colonizing by "dress[ing] for success..." rather than "focus[ing] on how the history of the country has been checkered." Because there's little to no oversight or regulation for the privately managed charter school sector, these and many more such incidents will continue unabated.

There's another major problem with García's expansion of Gülen charter schools in LAUSD. Part of the Gülenist modus operandi is to staff their schools with teachers lacking credentials (part and parcel the standard in the charter school industry), many of whom have never taught before at all. Gülen schools bring in Turkish businessmen and professionals on 1HB visas to teach, yet there is currently a glut of highly qualified, credentialed, unemployed teachers in LAUSD. Gülen supporters claim a lack of educators versed in Science, Technology, Engineering, and Mathematics (STEM), but the reality is that there's neither a shortage of STEM workers nor teachers in the United States. Instead, Gülen movement watchdogs have demonstrated a pattern of abuse in regards to H1B visas.

Ultimately, the failings of Gülen Charter Schools are the same as with all charter schools. They are privately managed. They have unelected boards. They have a glaring lack of transparency both in terms of finances and operations. They contribute to the deprofessionalization of teaching. They undermine public schools and the bare semblance of democracy which those public commons represent. They are, to all intents and purposes, private organizations with access to a publicly financed revenue stream. Johathan Kozol's prescient prediction that our public school system was on the corporate auction block is being borne out by the expansion of Charter Management Organizations. Gülen Charter Schools are a symptom of a much deeper systemic problem known as neoliberalism.

School board trustees are elected to represent their community's interests in regards to public schools. That Mónica García is so beholden to the competing interests of the lucrative charter school sector raises serious concerns of opportunism, greed, and favoritism. Her championing of the Gülenist charter movement is further proof that she has little to no consideration of her constituents and our community's schoolchildren.

Special thanks to Sharon Higgins of The Perimeter Primate, Charter School Scandals, and The Broad Report for her copious existing research on this topic and encouraging me to write this specific piece. See this video for an idea of the breadth of her knowledge: Charters, Privatization Of Education & The Gulen Schools In The US: Sharon Higgins Speaks Out