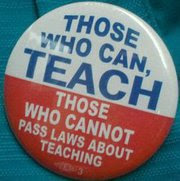 The following is my edited commentary in response to comments by a CCSS supporter on the Professor Ravitch post: A Teacher of Latin Writes In Defense of Fiction.

Kaye Thompson Peters, I've grown weary of the trite "apple and oranges" device that you employ everywhere in your stalwart defense of Corporate Core. You even used it in a gushing apology for Common Core State Standards (CCSS) on Hoover's fringe-right EdNext. While you might not be uncomfortable that Pearson Education, Inc. has been promoting your writings on CCSS, it does cause some of us consternation. When discussing CCSS in relation to NCLB and RTTT, we're not conflating apples and oranges, we're discussing a bushel of rotten apples foisted on us by a bunch of billionaires suffering from the Shoe Button Complex.

To be sure, the revenue minded corporate overlords who coined Corporate Core have never considered high-stakes standardized testing a separate issue from their imposition of CCSS. They are one in the same and they serve the same set of goals in the neoliberal project of privatizing public schools. The Gates Foundation and the Duncan led Department of Education (my apologies for that redundancy) have been quite effective in convincing surrogates (some even in the AFT and NEA, sadly) to crow that they aren't inextricably linked. Such propaganda is so transparent that astute people see right through it. Ms. Peters, CCSS isn't a solution to, but instead it is a deliberate doubling down of, the vile policies of NCLB and RTTT.

Privatizer Dr. Catherine Thome's explanation for the impetus of Corporate Core tells us all we need to know about who stands to gain from CCSS:

"All students must be prepared to compete with not only their American peers in the next state, but with students around the world."

David Coleman's contempt for literature in English classes (at least for working class children) reflects both his corporate pedigree and that of his plutocrat handlers. It is no "red herring" to point out this glaring fault of CCSS, but I do agree with Mr. Heller that there are other fundamental flaws to this nationally imposed corporate curriculum. We need far more "Grapes of Wrath" and far less "FedViews" in this society. Sandra Stotsky does an excellent job taking on Coleman's corporate aims in her piece reproduced on the Parents Across America site.

Ultimately we must resist CCSS. Susan Ohanian, Professor Stephen Krashen, and the Schools Matter camp are leading the way on this. My recent short on Schools Matter has some great resource links for fighting CCSS.