A local columnist in Memphis, Wendi Thomas, has a cynical piece today in the Memphis Corporate Appeal on the planned shutdown of 12 more Memphis schools.

The Shelby County School Board, which represents the interests of the corporate machine, has brought in an economist from Chicago to assure the local media and politicians that the closure of 47 schools in Chicago is fine, because, after all, the closures have not affected test scores in Chicago. How the Chicago researcher knows this is hard to tell, since the closures were only approved at the end of the last school year!  So, school closures in Memphis will be just fine, the illogic goes, because someone said it will not hurt test scores in Chicago.

The meeting will be at 6 PM today at 160 South Hollywood in Memphis.

Below is a chart that Wendi Thomas posted from the Achievement School District, which attempts to justify the closures on low test scores and low enrollment. 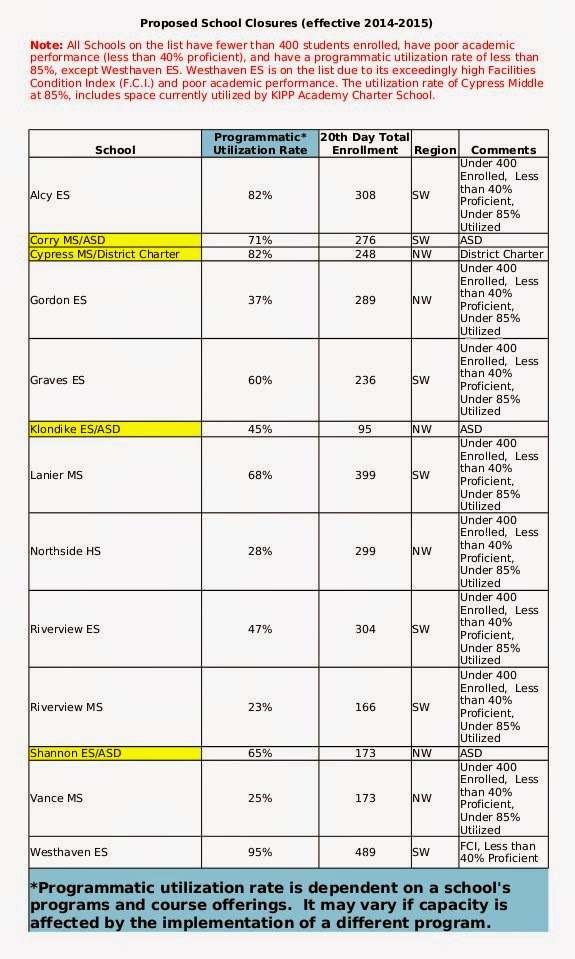 Will Shelby County Schools try to make the case that turning over closed public schools to smaller corporate charter operators will improve the "programmatic utilization rate?"  I'd say.

In terms of low test scores of targeted schools that the chart above identifies as  having "less than 40% Proficient," this is another phony criterion being used to justify school privatization in Memphis.

Note in the chart below that the Memphis average is closer to 30% of students at Proficient.  Are the poorest schools supposed to be better than the average school in terms of test scores??

When we look at the Memphis charter schools in the chart below from the latest State report (2012), we see that very few of the replacement charter schools have proficiency rates over 40 percent. 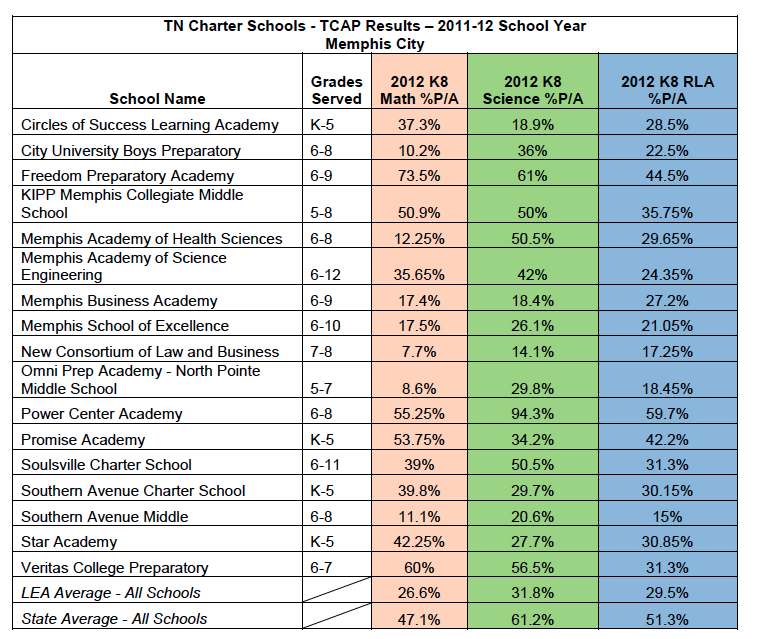 In fact, we find a number of charter schools'  Math or Reading/Language Arts scores below Wendi Thomas's public poster school of failure, with its 20 percent of children proficient in reading and math. Why is the school board of Shelby County not howling to shut down these segregated charter schools?

Please note, too, the vast differences in the percentages of ELL and SPED students in Memphis charters, compared to Memphis public schools:

Below are my comments on the Wendi Thomas column, which is here if you can get by the firewall.


Let's face it, these planned closures will serve the needs of corporate charter school operators and the local/state political cowards who are flush with Gates cash and federal grants for coming up with this scheme.
Ms. Davis is quick to note that leaving these malignantly neglected schools open will not solve poverty in the community, but she does not acknowledge that closing them will have the opposite effect, as these schools, once closed, will remove the principal sources of any remaining pride in these impoverished communities, These closures will simply add to the reasons for others to flee these areas that could use some of the hundreds of millions that will be outsourced to charter operators to open schools with fewer students.
The charters that replace them will pay corporate foundations to provide charter reform schools that look more like minimum security prisons than schools, with white missionary teachers who work for a couple of years before moving on to grad school. It's not hard to tell who the winners and losers are here, especially since most of the charter reform schools do no better on tests than the shuttered public schools.
What will happen to the empty schools? Easy--they will be handed over the KIPPs and KIPP knockoffs to use for a few dollars a year, if that.
Please note, too, that if the size of the student population were the issue here that most of the charter schools in Memphis should be shut down, since most are smaller than these public schools that are on the chopping block.
Finally, to Ms. Davis's callous calculus in weighing the effects of closure in Chicago of almost 50 schools. To reduce down the human loss and the community disruption to whether or not test scores went up or down as a result seems to me to show a level of indifference that I am unaccustomed to seeing, even in the Commercial Appeal.