"In an even more disturbing revelation heard on the tape Rhee laughs about when the tape was removed hurting the children and some even started to bleed." — John Kugler 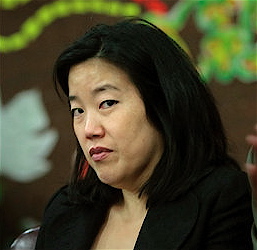 "Jack," a frequent commenter on Professor Ravitch's site, sent me the following analysis in which he compares various sources on Michelle Rhee recent deceitfulness. Jack's commentary takes the original guest post on NYC Educator, combines it with other information from The Frustrated Teacher, and makes several salient points. What struck me the hardest was the reminder of how Rhee's fellow neoliberal corporate reformers found her glib account of her child abuse amusing. I suppose when your entire life has been dedicated to harming young children through high-stakes testing, constant stress, inhumane expectations, and all other forms of cruelty that corporate edreform imposes, bloody lips are really no big no deal in comparison. Aside from her pathological inability to tell the truth in any venue, the fact that Rhee revels in her acts of barbarism really speaks to the theories that she might be a sociopath. Given that the plutocrats paying (read investing) for the neoliberal corporate education reform project are all sociopaths themselves, it makes good sense that they'd hire someone just like them.

"NYC Educator" today made a nice grab of an October 2013 interview—in the on-line Financial Times—where Michelle Rhee lies (shocking, I know!) and totally changes the details of the now infamous story where she taped the mouths of her students.

He points out the inconsistencies of her October 2013 version VS. her August 2010 version:

We all know the true details from Ms. Rhee's original (August 2010) telling of the story.

As heard in an audiotape of Ms. Rhee which is still available on-line, Ms. Rhee told all her 35 third-graders (ages 8-9) to remove the tape from their mouths—the tape that she had earlier chosen to put on their mouths as a way to shut them up.

This mass removal led to:

— all 35 students' lip skin being ripped off,

This was, of course, back during Ms. Rhee's heroic teaching days. (you know... when her brilliance enabled her students to move from the 13th to the 90th percentile... oh, yeah... I forgot... that was a lie, too.)

However, on the October 2013 interview, she was singing an entirely different tune. (SEE BELOW)

Unfortunately for Ms. Rhee, there remains a problem with her changing her story:

the audio of her original telling of the story remains on-line for all to hear how bogus her later rendition is.

Listen to it HERE: (among other on-line locations)

(my summary of the "NYC Educator" article follows)

October 2013: Rhee claims that one of her students asked her for the tape to be placed on his mouth, and with that child—and also with the rest of the students who also asked for the tape—she complied... which she now regrets.

"One of the boys asked for a strip of Scotch tape instead and suddenly everyone wanted the same thing.”

August 2010:  Rhee claims that she came up with the idea herself, without any child asking her to do so.

Looking back, Ms. Rhee claims no regrets, but instead, she enthusiastically, proudly, and humorously (?!) reflects on having done so:

"So, I decided, OK, kids, we are going to do something special today.  I lined everybody up and I was like,

" 'Sshh, gotta be really quiet on our way down to the cafeteria.'

"And then, I took little pieces of masking tape and put them on everybody's lips,

Lie Number 2:  How many kids in Ms. Rhee's class had bleeding lips, and had lip skin getting ripped off? Just one, or all 35?  A little bleeding, or a lot?  Did any lip skin come off when the tape was removed, or no lip skin at all come off?

October 2013: Rhee claims that only one of children's lips bled—"That's all that happened"—with no kids' lip skin coming off.

“And when I removed the strips, one of the boy’s dry lips bled a little. That’s all that happened. Now it’s turned into, ‘Michelle Rhee duct tapes children!’ But the only reason anyone knows the story in the first place is because I told it.”

August 2010:  Rhee claims that every child in her class (all 35 !!!) had lips that were "bleeding," and "skin coming off": (provoking uproarious laughter from the audience)

"And I realized that I had not told the kids to lick their lips beforehand. So, and like the skin is coming off their lips

Lie Number 3:  In what context did Rhee tell the mouth-tapingstory? In an interview, or in a speech? Underpressure from journalists, or under no such pressure?

October 2013:  Rhee claims that journalists pressured Ms. Rhee into telling the story, back when she was too eager and willing to answer any all questions posed to her.

Ms. Rhee now claims "I was stupid" for having been so open. Back then, she was not yet "particularly media savvy."

"I think when I took the job in DC, I was not particularly savvy about the media.  People asked me for interviews, I answered the questions and because I was so honest about my thoughts, it gave them the material.  I can’t blame anyone other than myself for that. I was stupid.”

October 2010:  No one pressured Ms. Rhee to tell anything. This story was told in a speech to new Washington D.C.P.S. teachers, a speech over which Ms. Rhee had total editorial control over what she was saying.

Washington Post: "This audio recording is an excerpt of D.C. Schools Chancellor Michelle A. Rhee talking to first-year teachers about her early misadventures as an educator. She spoke at the Columbia Heights Education Campus on 16th St. N.W."

One more thing to note:

At some point after including the audio of Ms. Rhee's speech on its website, the pro-Rhee Washington Post  later removed the audio of this from its coverage.

Go to the link here:

Rhee talks about her early misadventures in teaching

Thankfully, dozens of others saved it, including "Frustrated Teacher" from the above link.