"Bill Gates's foundation pays educators to pose alternatives to union orthodoxies regarding seniority and test scores." "Two other Gates-financed groups, Educators for Excellence and Teach Plus, have helped amplify the voices of newer teachers as an alternative to the official views of the unions. Last summer, members of several such groups had a meeting at the foundation’s offices in Washington." — New York Times 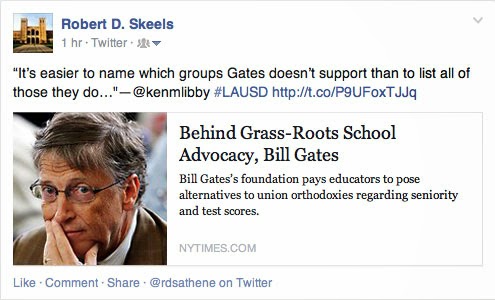 Although it's being debated vigorously in United Teachers Los Angeles (UTLA), let's leave the discussion about UTLA online voting aside momentarily. Let's even ignore the all too transparent reasons why Teach Plus—a member of the nonprofit industrial complex (NPIC)—is pushing for it, and is willing to host dinners and drinks at four different restaurants.* Instead, why don't the online voting petition wielding UTLA members ask their Teach Plus "allies" some important questions. Here are a few of my questions for these supposedly unaligned teachers to ask the Teach Plus cadre as conversation starters:

How do you feel about being associated with an organization that was intimately involved with this tragic incident?

Often the decisions about which teachers will stay and which will go are made by new principals who may be very good, but don't know the old staff. "We had several good teachers asked to leave," said Heather Gorman, a fourth-grade teacher who will be staying at Blackstone Elementary here, where 38 of 50 teachers were removed. "Including my sister who's been a special-ed teacher 22 years."

How do you feel about Teach Plus' founder, Celine Coggins', close ties with the fringe-right The Hoover Institution at Stanford University? Coggins is also on the advisory board of the dubious National Council for Teaching Quality (NCTQ) along with folks like Rick Hess, Joel Klein, Michelle Rhee, Eric Hanushek, and Stefanie Sanford. NCTQ is funded in part by the Lynde and Harry Bradley Foundation, the Laura and John Arnold Foundation, the Searle Freedom Trust, and the Ewing Marion Kauffman Foundation.

How do you feel about receiving the majority of your funding from Bill Gates, a plutocrat who also funds the American Legislative Exchange Council (ALEC), The Discovery Institute (which actively advocates teaching creationism), invests in Monsanto, and for-profit prison companies?

How do you feel about your organization receiving large sums from the right-wing NewSchools Venture Fund, led by reactionary Ted Mitchell, whose role in the wholesale privatization of California schools earned him a spot in billionaire Forbes' Top Education "Disruptors" list?

While we can all agree that this language: "Teach Plus, with its teacher members, is focused on developing innovative policy solutions in the following areas: measuring teacher effectiveness; improving performance evaluation systems" is a euphemism for using widely discredited "value added methodologies," what is Teach Plus' current stance on this issue now that the American Statistical Association has just released a very important document on Value Added Methodologies?

That's probably enough questions to get the party started. I hope the free dinners are worth hearing the answers.

* These aren't cheap restaurants either. We held our wedding reception at "El Cholo" Koreatown. It's a nice place by my humble, working class standards.