First published on solidaridad on March 19, 2015

"The shady nature of Alliance's real estate dealings, their dismal SAT scores and CSU remediation rates, and their refusal to educate every child are all compelling… [a]llowing these private entities to cherry pick students and avoid educating the most vulnerable and needy students is immoral. Taking a strong stand as a community against that kind of discrimination sends a strong message to these corporate schools that we demand equity for all our students." — Robert D. Skeels 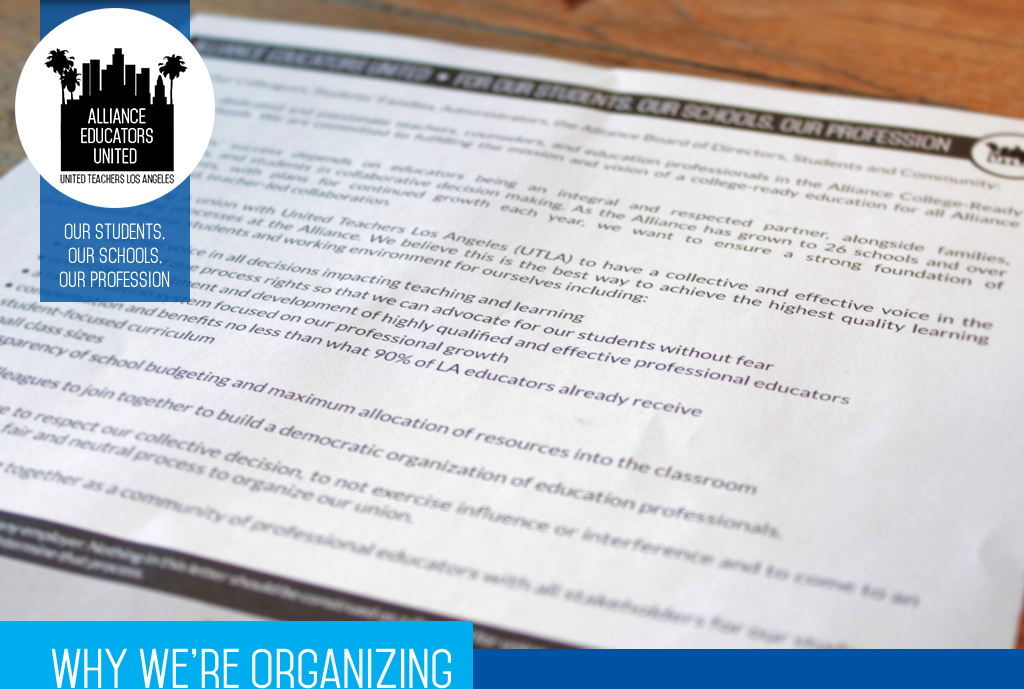 The announcement that the nascent Alliance Educators United joined with United Teachers Los Angeles (UTLA) in order to empower their force of professional educators to advocate for their students is exciting news indeed. That this is occurring at Alliance Corporate Charters is noteworthy. We are witnessing authentic organizing in the belly of the beast — given how Alliance was formed by Republican venture capitalist Richard "Dick" Riordan and his cabal of profit-hungry businessmen as a means of trying to discredit public education. Alliance's top-down, business-rather-than-pedagogy informed methodologies have failed miserably. For example, in 2013: five of the seventy-five lowest SAT performers in LAUSD were Alliance schools. Add to their educational leadership vacuum administrators fixated on personal financial gain, rather than school community building, and you have Alliance's recipe for disaster. This is why they have had major teacher turn-over issues. Alliance's educators have been poorly treated, and they were fearful to advocate for their students against Alliance's business-banker management culture.

Unionized educators will go a long way towards addressing some of Alliance's more egregious practices.

There's another dimension to this story. In 2010 UTLA drafted their UTLA Proposed Charter School Policy document outlining a set of social justice principles that the union stated it "expects that all charter schools adhere to". These well reasoned expectations are very much like the demands put forth by the Honorable Jackie Goldberg founded Transparency, Equity, and Accountability in Charter Schools (TEAch) organization. Everyone should join TEACh, even families with children enrolled in privately managed charter schools.

Want to encourage both UTLA and Alliance Educators United to keep the UTLA Proposed Charter School Policy in mind for all their future organizing, and hope that they will transform many of those principles into concrete demands that Alliance begin to treat their students right. I'm including the UTLA Press Release, the UTLA Proposed Charter School Policy, and TEAch's mission statement below. I hope these serve to ignite a conversation about how we can force the lucrative charter school industry to finally place student need above corporate greed! 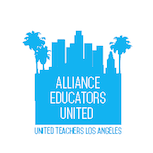 FOR IMMEDIATE RELEASEMARCH 14, 2015
CONTACT:
Josh Kamensky, 323-205-6634josh@smogtownstrategies.comKim Turner, 213-305-9316kturner@utla.netALLIANCE CHARTER SCHOOL EDUCATORS ANNOUNCE FORMATION OF UNIONTEACHERS, COUNSELORS AT LA’S LARGEST CHARTER SCHOOL CHAIN SEEK A VOICE TO ADVOCATE FOR STUDENTSTeachers and counselors at Alliance College-Ready Public Schools announced Friday that in order to achieve the highest quality learning environment for their students and working environment for themselves at their fast-growing charter school organization, they are organizing a union at their schools.Educators maintain that having a respected voice in all decisions impacting teaching and learning is critical to ensuring a strong foundation of student-focused, teacher-led collaboration. “I believe that using the teacher’s voice in policymaking for our schools is the surest way to develop the best environment for our students and to create a legacy of greatness for the Alliance,” said history teacher Elana Goldbaum.Alliance College-Ready Public Schools began operations in 2004 with the opening of Alliance Gertz-Ressler High School in the Pico-Union neighborhood. Today, with 550 teachers and counselors serving 11,000 students at 26 schools, it is the largest charter operator authorized by the Los Angeles Unified School District. The organization’s Board of Directors includes some of Los Angeles’s most active civic figures, including former mayor Richard Riordan and former ambassador and investment banker Frank Baxter.“By giving teachers a voice in the decision making at Alliance, we can ensure that we are allocating resources appropriately and serving our kids in the best way possible,” said teacher Xochil Johansen of Stern Math and Science School. Added teacher Aaron Livingston, “Organizing the union will help the Alliance keep good teachers from leaving.”Many Alliance educators note that retaining and recruiting talented staff is vital for student success and the well-being of the school community. Teachers at other schools agree. “Students deserve a sense of stability and safety in the relationships they build and they deserve educators who are invested in providing the best instruction,” said Bre Delgadillo, a teacher at Apple Academy Charter School in South L.A., who formed a union with her colleagues in 2014.A letter signed by community leaders expressed support for teachers and called on Alliance to “listen to your teachers and to respect their fundamental right to organize a union […] without management influence or interference, and come to an agreement with Alliance teachers for a fair and neutral process to organize their union.” The letter was signed by leaders from the Coalition for Humane Immigrant Rights of Los Angeles (CHIRLA), California Partnership, the Alliance of Californians for Community Empowerment (ACCE), and Strategic Actions for a Just Economy (SAJE).“It’s this simple: Every school does better when teachers have a voice,” said UTLA President Alex Caputo-Pearl. “UTLA is proud that Alliance teachers are organizing to join with more than 35,000 educators—over 1,000 of whom teach at independent charter schools here in Los Angeles—to protect educational standards for students in our city.”  #  #  #
Josh Joy Kamensky
www.smogtownstrategies.com
323-205-6634

About TEAch: Transparency, Equity, and Accountability in Charter Schools

We are an organization of parents, teachers, school employees, taxpayers and community members who want to ensure that charter schools are Transparent, Equitable, and held Accountable for their practices, for the outcomes of the students they serve, and that they do no harm to students attending traditional public schools.

1. To provide research and development for all public schools on best practices in order to ensure that ALL young people have access to a high quality education; and

2. To lead the way, by example, in transforming public school outcomes for ALL students through teacher-led schools, relieved of the hierarchy of central administration.

We support the original goals of charter public schools.

The current goals of some charter school operators are to greatly expand and capture as many taxpayer dollars as possible for their own schools, thereby removing funds available to traditional public schools. The almost ENTIRELY UNREGULATED CHARTER school system in Los Angeles currently receives at least $683 million (more than $1/2 billion!) per year in taxpayer funds, money that used to go to Los Angeles Unified School District students. Without Transparency, Equity, and Accountability, we know that many charters are not living up to their own goals as stated in their charter applications.