Another peek behind the neoliberal corporate education reform curtain

“Yes! Of course they [public schools] can, but my charter (school) friends don’t like it when I say that.” — Paul Vallas 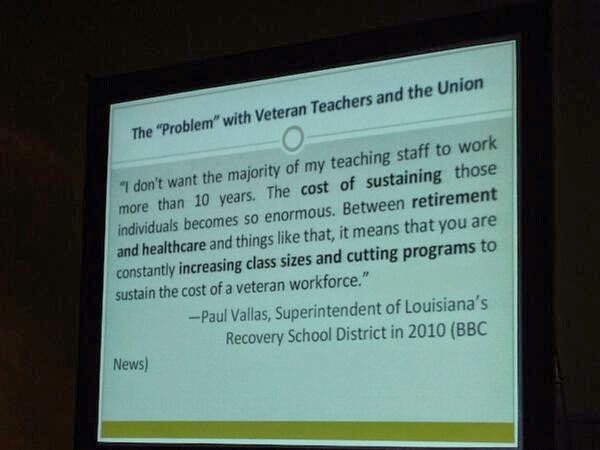 The only nice thing about the right wing is that they don't obscure the reasons behind corporate education reform. Devoid of empathy, compassion, or even an inkling of the notion that human need should trump corporate greed, devotees of Randian "thought" are often entirely honest about motives of neoliberalism. Contrasted to leadership in the Democratic Party, who try to hide the premise underpinning neoliberal policies, the right wing is far more transparent on this issue. For example, arch-reactionary (and charter industry profiteer) Andy Smarick gave us an early peek behind the curtain in 2008 when he admitted that the lucrative charter industry deliberately discriminates against Students with Disabilities (SWD) and other special needs children in order to help bankrupt public school districts. The candor of his Wave of the Future piece in the fringe-right Education Next is as refreshing as it is chilling:

"As chartering increases its market share in a city, the district will come under growing financial pressure. The district, despite educating fewer and fewer students, will still require a large administrative staff to process payroll and benefits, administer federal programs, and oversee special education. With a lopsided adult-to-student ratio, the district's per-pupil costs will skyrocket." [emphasis mine]

Confronted with incontrovertible evidence that the charter industry discriminates, so-called "liberal" corporate reformers like Arne Duncan, Michelle Rhee, or Ben Austin never publicly admit this is true, much less admit that it is deliberate and by design. The same goes for their assault of the teaching profession. Corner reformers on their attacks on teachers and one gets treated to an array of platitudes about wanting to "elevate the profession", and so forth. One of their reform darlings, Paul Vallas, is up-front about the war on professional educators, particularly the experienced ones. Here is the text from the slide pictured above:

"I don't want the majority of my teaching staff to work more than 10 years. The cost of sustaining those individuals becomes so enormous. Between retirement and healthcare and things like that, it means that your are constantly increasing class sizes and cutting programs to sustain the cost of a veteran workforce."

Doesn't need any explanation, does it?

Another area where the right-wing is forthcoming about the true purpose of neoliberal corporate education reform is in the rationale behind "school choice." Never mind the racist origins of the phrase school choice, or how it is the key factor behind today's schools being as segregated as the times prior to the nineteen-sixties, corporately subsidized Democrats, like Ben Austin of Students Matter, are on record saying of school choice: "It would force the district to learn how to run great schools by forcing them to compete." There is absolutely no evidence that this is true. The disciples of the radical right-wing economist who first advocated "competition" and "choice" in the education sector are entirely honest about this. I was exposed to Robert Weissberg's essay by someone during the struggle against the former Gates Foundation executive, Yolie Flores's, attack on Los Angeles public schools in the guise of her vile Public School Choice giveaway program to the charter sector. The paper was quite revealing in that like the Smarick piece above, it was candid about the real reasons for school choice — which have nothing to do with improving schools. Here is an excerpt of the abstract:

"Despite ample debates over the efficacy of school choice, theorizing has lagged behind and this hinders progress. Milton Friedman, the choice movement founder, never claimed that choice would improve academics; choice was inherently valuable and parents might demand anything. Choice advocates also exaggerate the remedial power of markets and proliferating academic options seldom brings academic diligence. Given free tutoring opportunities, those lagging behind reject them, and costs will usually be too high for most low achievers. Extensive schooling options already exist, so waging political battles to add more is unnecessary."

School choice has never been about improving education, rather it has always been a specious argument used to advance the privatization of education. I suppose in a way we owe Smarick, Vallas, and Weissberg a thank you for being honest about what really drives the charter school project, and all its attendant education reforms.