“We believe that this recognition has come about because of the “blatant” move by corporations to take over public education and the creation of these charter schools who are limiting the rights of teachers and the type of education that our children are receiving.” — Juan Orozco

Roosevelt High School and the Boyle Heights community have a long and proud history of fighting for social justice, from the election of Ed Roybal to the Los Angeles City Council in 1949, to the fight against Prop.187, and to the current struggle against the scheduled layoffs of 23 RHS teachers and the struggle to dump PLAS. This video was taken when the Great Recession began and when PLAS came in. In June of 2008, when this video was produced, there were about 240 RHS teachers, now there are only 110 and dozens of classes have been cut. This Saturday, May 23, 2015 at 8:30 a.m., RHS will be having a youth conference. Dr. Antonia Darder will be presenting. Antonia is a world renowned writer on critical education theory, Latino education, and Paulo Freire. I am sure that Antonia will connect theory and practice to the situation at RHS. Please attend this important event. La Lucha Sigue 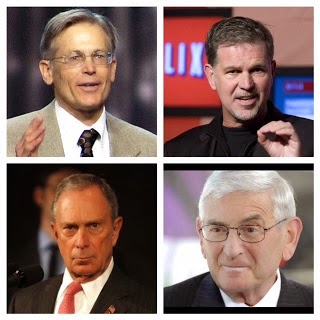 Professor Mike Klonsky's post Charter billionaires buy L.A. school board election is worth the read. I left the following comments:

Thank you for this Professor Klonsky. Poverty pimp Refugio "Ref" Rodriguez has spent his entire career viewing and utilizing school children as ATM cards. Now that the billionaires have installed him at #LAUSD, he has the combination to the entire bank vault.

Public school parent and member of the Venice Neighborhood Council Education Committee Karen Wolfe wrote an excellent piece looking at the May 19, 2015 Los Angeles Unified School District (LAUSD) Board elections entitled LA Election Lessons: Anatomy of a Shakeup … in the LAUSD Board Races. I made the following comments:

Thank you for this excellent analysis Ms. Wolfe. Charter profiteer and poverty pimp Refugio "Ref" Rodriguez has spent his entire career viewing and utilizing school children as ATM cards. California Charter Schools Association (CCSA) boasted that they "generated 30% profit margins in subsequent years–with 20-30% lead generation and 20-50% close ratios" when Rodriguez was a CCSA board member. Meanwhile he ran Lakeview Charter in the red for the better part of decade, and oversaw Jacqueline Duvivier Castillo's self-dealing with the now breaking Better 4 You Meals scandal. Now that these right-wing billionaires have installed him at #LAUSD, he has the combination to the entire bank vault. We can only hope that the LAUSD OIG and LA District Attorney's office will indict Rodriguez, but a cover-up is more than likely since José Cole Gutiérrez was one of Rodriguez's employees when Rodriguez sat on the CCSA board.

Charter industry mogul Refugio "Ref" Rodriguez is under investigation by a number of authorities including the LAUSD Office of Inspector General and the Los Angeles County District Attorney's Office. Keeping up with all of the financial scandals and possible felonies by this Rodriguez charter is difficult, the following articles should help.

Right-wing hedge fund manager and school privatization pusher Whitney Tilson was quick to jump on the blame-the-victim bandwagon. An email to his cult of fellow neoliberals said "I question her story" of Emma Sulkowicz.

Suing a school district for failing to provide mental healthcare may seem, at first blush, to be a stretch. What part of the 3Rs is mental healthcare? But this is a stretch that is needed – like those stretches people who exercise do before they exercise.

Education is about stretching our little grey cells. It’s about being safe and well and healthy. Maslows’s Hierarchy of Needs: Food, Comfort, Safety.

Then and only then can we get down to the Rs.

In Compton and in most of the brink o’ th’ apocalypse they inhabit the school nurse is most students’ primary-and maybe-only healthcare professional and medical provider. The school nurses’ office has become the Health Office has become the School Wellness Center – even as the School Nurse has become a vanishing species, repurposed to paperwork shuffling and IEP Compliance Officer – often traveling from school-to-school on a one-day-a-week rotation.

This has all worked out because school health crises: The flu outbreak, the second grader who falls out of a tree, the incident of diabetic or anaphylactic shock – these only occur on the days the nurse is at the school and is otherwise available. I have spent some of the last month reading essays by middle-schoolers about the impact of violence and trauma on their lives. Most need additional instruction on narrative storytelling  (and grammar+punctuation) …but the far more pressing need is for mental health professionals to begin to have the conversation with them about their lives.

LAUSD in planning to eliminate some psychiatric social workers in next year’s budget. The bad-news masquerading otherwise is that the District is not going to eliminate as many as first proposed. Nobody in their right mind is proposing to rehire mental health workers previously laid off.  But I am.

Post Traumatic Shock Disorder is not just for returning warriors anymore. This is not John Boy’s America. This is not the Bobsey Twins’ America. Rebecca of Sunnybrook Farm graduated decades ago and doesn’t come back for the alumni meetings ‘cause she’s scared of the neighborhood. Today’s narrative was written back in 1969: “Oh, a storm is threat'ning / My very life today / If I don't get some shelter / Oh yeah, I'm gonna fade away.”

“Come in,” she said, “I’ll give you shelter from the storm”

It’s an apt metaphor to duck in under.

Right-wing extremists Antony Ressler, Richard "Dick" Riordan, and Judy Ivie Burton are still turning children into profit centers, and union busting at the Alliance Corporate Charter Chain. The ongoing struggle for their beleaguered educators to organize themselves continues. Community activists are taking the struggle to the streets, and posted this and other photos on facebook with the following caption:

Attending the Lincoln Heights Neighborhood council asking them to adopt our resolution calling on Alliance to let teachers form their union without harassment ([i]t passed unanimously!)

I left the following thoughts on the photo:

I document Judy Burton's mind-boggling salary in this piece about her fellow charter school profiteer Refugio "Ref" Rodriguez. https://www.laprogressive.com/charter-school-profits/ That obscene $330,400.00 doesn't include the additional six-figure income she gets from CalSTRS+CalPERS. She will go to any length to prevent educators from exercising their lawful right to organize. Any movement to put students and educators ahead of executive salaries and board member sweetheart deals at Alliance Charter Corporation will be resisted with extreme prejudice, as you are already experiencing.

Refugio just dumped gallons of toxins on Santa Barbara for profit. Another Refugio (Rodriguez) is about to do the same to #LAUSD