This sacrifice of common sense is the certain badge which distinguishes slavery from freedom; for when men yield up the privilege of thinking, the last shadow of liberty quits the horizon. 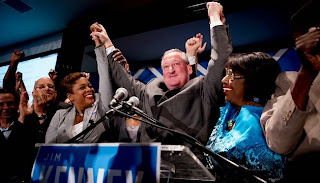 Norm Scott of Ed Notes Online, who was in the NYC United Federation of Teachers when Weingarten became its President, said of her credentials recently:
Randi has distorted the reality of her teaching experience, often by parsing the language to give an impression that she taught for 6 years when in fact she taught full time for only 6 months at Clara Barton HS in Brooklyn. The rest of the time she taught a few classes a day before going off to her other job at the union - a unique arrangement not exactly available to the average teacher. (My guess is that once Shanker came down with life-threatening cancer around 1989 or 90, he and Sandra Feldman, then UFT president, had to decide on succession and Randi, a fairly recent arrival at the UFT, was chosen over people who had worked for the UFT since its inception, leading to some resentment.) Since Randi was a lawyer - she was the UFT counsel - with no teaching credentials, they had to scramble to get her certified and find her a "teaching" part-time gig before she could claim the mantle of UFT president. They found her a "safe" school near her home. Clara Barton, across the street from Brooklyn Botanic Gardens, was a vocational school focused on nurse and health care worker training, a school that attracted a number of girls. Unity Caucus member Leo Casey was the chapter leader and would cover Randi's back when needed. Everyone in the school knew they were getting a "celebrity" staff member who would one day be the president of the union. By never having taught in real conditions like her constituents, Randi never had a sense of what it was really like.

As is the case many times in history, young people who have their whole lives in front of them and want a say in what kind of world they will live in, are unencumbered by past practices and political connections. On May 12th, hundreds of Philadelphia his school students did not report to school and Opted Out at the beginning of the Pennsylvania Keystone standardized tests. (Video of a student walkout.) Some administrators threatened the students with being denied the right to participate in the Prom or walk in their graduation.

A Philadelphia teacher was suspended for four days without pay for informing parents about Opting Out when asked.
Philadelphia high school student Giancarlos Rodriquez on The Rick Smith Show on why students opted out of the PA Keystone test.
A parent from Kensington High School talks on The Rick Smith Show about the suspension of her daughter for a week for Opting Out of PA Keystone Exams.
A Philadelphia teacher shares what it’s like to subject students to hours of standardized testing and what it is doing to his students.
On May 19th, Election Day, the Caucus of Working Educators in the PFT held workshops at Central High School about various issues in education today. This video has excerpts from the Opt Out session which shows the testing crisis that is deepening in Pennsylvania.
The young people Opting Out are showing what must be done to stop the privatization onslaught. Only such acts of civil disobedience, combined with a mass mobilization against corporate education reform, can change the trajectory of events. Out of this mass mobilization a political movement must be developed which declares independence from the two-party system and develops a program for the needs of the 99%. 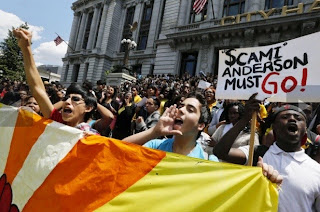 Who got the first meeting with Kenney after the win? S. Jersey political boss Norcross
Philadelphia Inquirer - May 22, 2015

Divide and Conquer: The Philadelphia Story | Defend Public Education - May 4, 2015

Also see:
Kathy Hochul: Best Way to Support Public Schools Is By Taking Money From Them, Giving It To Private Schools and Charters | Perdido Street School - May 22, 2015
Randi Weingarten made robocalls for Governor Cuomo's running mate Hochul in the Democratic primary.
at 10:41 PM