Rhee and former Union Chief in Memphis to Sell Charters 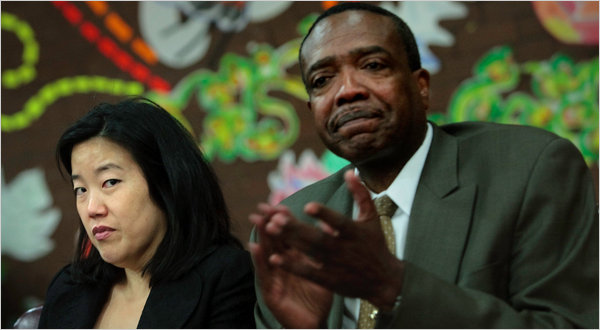 As I noted in 2011, "after DC voters last year repudiated Fenty and Rhee, one of the first actions by DC teachers was to replace the scheming, ineffectual, and bought union president, George Parker, who had sold out and signed on to the contract crafted by Weingarten and the Broad Team." 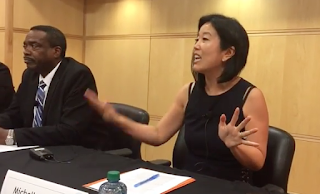 Rhee (teeth bared at right) and Parker were in Memphis last week trying to browbeat parents into supporting the disintegrating Achievement School District, which is the state office in charge of handing out charter contracts to replace community schools in Memphis.


The Commercial Appeal had a story today about another Walton funded group in town to drum up support for Haslam's corporate giveaway, the Achievement School District.  A clip:


Stand Up for Great Schools, the pro-school choice network that challenges African-American “grass tip” leaders to take charge of their children’s education, held its first “policy summit” in Memphis Thursday. . . .

My reaction posted at the CA:

Grass tips? Really? I would describe these corporate reform has-beens as turf clippings, as in astro. Although seeing Carol Johnson, Michelle Rhee, Kevin Johnson, corporate unionist George Parker, and the over-excitable Roland Martin in the same room proclaiming for the Haslam segregated chain gang school agenda would definitely be worth the price of admission. Sorry I was out of town.

This is an obvious attempt to shore up support within black communities for the ASD's corporate education reform school plan, which has been repeatedly rejected by parents, teachers, and students, who are fed up with corporate education exploitation.

The question must be asked: who is funding these high rollers' trips to Memphis? Is it the same Walton Foundation that has backed previous efforts by Stand Up for Great Schools?