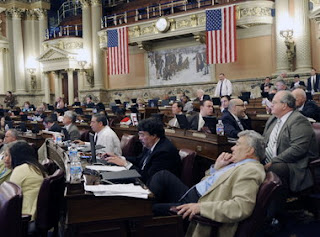 The bipartisan celebrations in Washington D.C. over the enactment of the Every Student Succeeds Act were barely over when the Pennsylvania Senate passed a bill which goes to the heart of the states’ rights dangers opened up by the new law.  In a bipartisan 42-9 vote on December 10th, the Senators approved a school code bill that would require the state to turnover to private interests five “persistently low performing “ schools each year. The only school district in the state affected would be Philadelphia.

As detailed by Kevin McCorry in Newsworks, the Pennsylvania Department of Education would have five intervention options:

The action is in line with the charter mandate in the Every Child Succeeds Act. As detailed by Jim Horn of Schools Matter in his article Massive Charter Giveaways in ESEA Re-Write, Part 1,

With a continuing federal mandate to fix the bottom five percent of schools, the ESEA rewrite will provide at least a billion dollars each year to fund charter school expansion, thus further weakening public education.  The new grant programs will be fashioned to provide minimal oversight and maximum autonomy to charter companies and their corporate support organizations, and for the first time, private non-profit corporations will be classified as “state entities,” thus eligible to apply directly for federal grant programs.

The Historical Background of the Bill