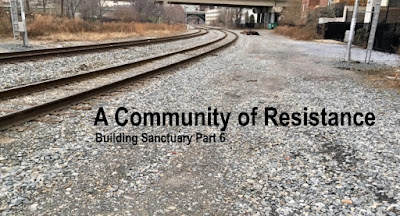 When I started writing this story, a few people suggested I include some hope in it; good organizing comes when you have anger, hope, and a plan. I’ll admit that hope is hard for me. I tend towards the dire, the energetically dark even. I know too much. My preference, of course, is that you all read this, and we begin to organize and resist to avoid full lock down. But if that doesn’t happen, what then?
Can a just society be rebuilt in the ruins of a Smart City or not? The next two installments are informed by my experience attending the Saturday Free School here in Philadelphia. I try to evoke elements of the black radical tradition and marronage, though perhaps not as successfully as I would have liked. Once I wrap this series, if there are others who would like to write an alternate ending, I would certainly be open to posting it. My goal with this project is to create a base of knowledge off of which others might riff, in new stories, graphic novels, plays, or visual art. The themes here need to be explored in other media, and I see this as a jumping off point. If this interests you drop me a line in the comments. To start this story from the beginning click here for Building Sanctuary Part One: Plugging In.
Part Two: A World Without (Much) Work
Part Three: Smart and Surveilled
Part Four: Data Mining Life on the Ledger
Part Five: Automated Education
It had been a challenging spring for Cam and Li’s family. Uncontrolled fires burned through California, disrupting both the tech and entertainment industries. Virtual Reality and gaming companies were recycling old content rather than offering new gigs, so the family’s income suffered. What made it worse was that Talia had entered into an income-sharing agreement to pay for VR classes, and their devices constantly buzzed with aggressive complaints from her investor.
Cam has been logging extra hours of SkywardSkills when she normally would be reading. The college prep partner she goes to once a week is running a competition, and the student who logs the most time gets a substantial payment to their Citi Badge account. Cam has put a lot of pressure on herself to stay ahead of the other students, but everybody is desperate for Gold Coin, and as the deadline approaches it is harder and harder to keep up. She’s lost a lot of sleep the past couple of weeks and it is getting harder and harder to focus.
Li responds to the stress by shutting down. She refuses to log on to her education modules, and it is getting harder and harder to drag her out of the house, even to go to her maker space placement. Her relationship with her AI learning assistant is on the rocks. She’s been entering false information into the social emotional surveys as a way of rebelling against the system, without realizing the long-term implications her actions will have.