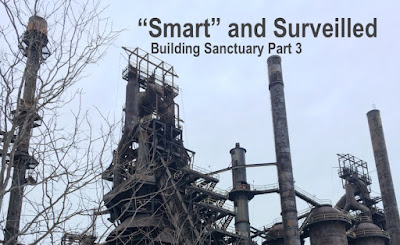 This installment highlights  smart city surveillance and the Internet of Things. Cam and Li’s lives, including their educational experiences, are shaped by ubiquitous algorithms that align their behaviors to the economic and social expectations put in place by the Solutionists. This is the third installment in the series. If you want to read from the beginning use this link to access the introduction and Part 1: Plugging In.
Cam and Li have grown up in a world controlled by sensors and data. All day, every day sensors watch, track and transmit information. The devices that make up the vast web of Internet of Things are tiny, but their combined power is incalculable. The most common IoT sensor in the pre-lockdown years was the smart phone. Practically anyone over the age of ten had one. Acting as a sensor, people’s phones were a primary means of data collection, logging information about how people interacted with each other, with systems, and their physical world.
The first sensors were created to monitor global supply chain shipments. Then, corporate, government and academic researchers devised a dizzying array of sensors to transmit data about most aspects of the physical world and how people live their lives in it. Instead of tracking pallets on cargo ships, they now track people, buses, energy, animals, art, storm water runoff, even sounds and footsteps. Each processor gathers a particular type of information that can be merged into the data stream for analysis. Predictive analytics algorithms, complex mathematical equations that anticipate future outcomes, tap into the data stream. Such algorithms can be used to predict when the bulb in a streetlight will fail, when a storm sewer will overflow, or even where a crime will happen.