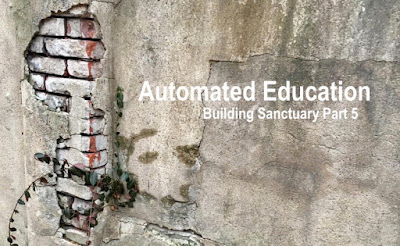 We are entering an age where companies can be composed of code rather than people; where philanthropy can be managed by artificial intelligence; and where citizens exist as datasets to be quantified and mined. Part five of this series examines how the ledger (blockchain) emerged as the force that enabled the complete automation of education and poses the question “What does education mean for those living on the margins outside the Citi Badge system?” To read from the beginning, follow this link to Part One: Plugging In.

Part Two: A World Without (Much) Work

Part Four: Data Mining and Life on the Ledger

The total reinvention of public education could not have happened without the ledger. The ledger makes it possible to disconnect students from school buildings and human teachers and shift to a learning ecosystem model. For years the mantra had been “any time, anywhere learning.” By the time lockdown came, deferred maintenance had resulted in such horrific building conditions that few neighborhood schools could maintain their occupancy permits.

It was cheaper to send older children home with a device and farm the younger ones out to community-based partners. With IoT sensors that could sync with learning management systems through xAPI, whatever children “learned” could be recorded automatically without the need for a human instructor. Most educational content had been broken down into such small standards and micro-credentials that it was almost impossible for human teachers to keep up with all the data entry as the system transitioned.