No Learning Institution is Safe 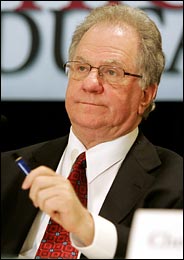 Back in September I had this post on the Bush crony who, with his 45-year old Bachelors in math, had been named by Spellings to head the Higher Education Commission to make recommendations for the future of colleges and universities. Even though the Commission has until August to report, it seems that Chairman Miller cannot wait to air his pre-conceived conclusions for the need of standardized testing in the American university system, which, so far at least, remains the envy of the world.

How much of this idiocy will the American people swallow before they rise up and say, hell no, we have had enough? Will they let these hacks jeopardize the best university system in the world as they look for a corrupt scheme to undercut and thus, privatize, public universities? See the Times story here, but first try this clip to get a flavor for this genius's thinking:

"What we call public universities would be under the most pressure," Mr. Miller said. "But the question is, How public are some of the private universities? They depend a lot on public funding, too. And we have shifted more of the cost back to students. So I think consumers and other people will begin to ask questions like this more."

"It would be O.K. with me," Mr. Miller added, if individual institutions like the elite universities in the Ivy League did not want to offer measures of student learning on standardized tests.
at 4:11 PM