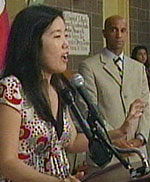 If you like your public school budget process entirely removed from the public, DC has your model. From WaPo:

A D.C. Superior Court judge ruled yesterday that the public has no right to see the District's education spending plan for the coming fiscal year until Mayor Adrian M. Fenty submits it to the D.C. Council with the entire city budget.

Before the mayoral takeover of the school system, parents and others could access the system's spending proposals in the fall and could lobby the elected D.C. Board of Education on funding and program changes. Their comments were taken into consideration before the board submitted its budget to the mayor.

"I know the plaintiffs are frustrated," Assistant Attorney General Robert C. Utiger said. "In years past, they got information that they're not getting now, and that's a result of the change in the governance structure."

The arguments in the case, in which parents and advocates sued Fenty and Schools Chancellor Michelle A. Rhee for not disclosing the fiscal 2009 education spending proposal, once again raised questions about the role of public input in the schools. This has been a recurring point of contention since Fenty assumed control in June.

For example, the takeover law called for a chancellor selection committee, but Fenty named Rhee to the post without its assistance. Months later, when Fenty and Rhee announced school closings, parents and D.C. Council members were upset at not being included in the planning.

At issue yesterday was whether Fenty and Rhee had to comply with the same laws that applied to the board. The board was required to release its budget before it was sent to the mayor, although education officials sometimes missed the submission deadline.

In denying the requests from the advocates, which included ordering Rhee to release all her budget documents, Retchin said the schools takeover law "is a sea change as to how budget is created."

But the judge commended the parents for their testimony, saying she was sensitive to their frustrations, and said they would be able to give their feedback to the D.C. Council once the mayor submits his budget, which is scheduled for March 20.

But by then it wouldn't matter, said council member Marion Barry (D-Ward 8), who was granted special permission to speak because he was not a party to the case.

"Once the city council gets the budget, of course they have a right to testify, but by then it's too late," Barry said. "It's very difficult for a parent to make that kind of change at that point. What they want is to have input before." . . . .