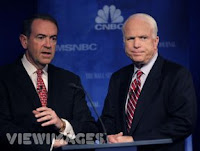 Thank you for taking my question.

When Eli Broad and Bill Gates announced last year that they would inject $60,000,000 to "force education to the forefront of the 2008 presidential campaign," their Strong American Schools program was launched. Some prefer to call their effort Strong-Arming American Schools, since their money appears directed toward remaking public education by turning schools into charter schools, which operate as non-profit and for-profit corporate entities funded by public dollars but without local school board oversight and without the benefits and salaries of teachers in the regular public schools. Recently, for instance, Eli Broad gave $12,000,000 to spread charter schools in L.A.

There are huge sums of corporate money, venture capital (with tax credits), and foundation grants going to fund charter school startups acoss the country. Even the U. S. Department of Education has earmarked $273,000,000 for charter schools in next year's budget. What they all have in common is less public oversight and control by locally-elected school boards, fewer benefits and less job security for teachers, fewer services for special needs children, even more focus on test scores, and less adequate facilities for drama, sports, and other school activities.

The one big advantage of charter schools? They are cheaper, about 20 cents on the dollar cheaper.

Now here is my question, and thank you for your patience. Given the fact that charter schools give up so much in return for the promise of corporte efficiency, and given the fact that the research consisently shows their academic achievement based on test scores no better, and sometimes worse, than the regular public schools, is 20 cents on the dollar enough to recommend them for the urban children, urban parents, and urban teachers who already have been shortchanged ever since slavery?

What is your position on charter schools, and what will you do to make sure that public schools in urban and poor areas aren't replaced by this new efficiency model of corporate schools and year-round test preparation? And would you send your own children or grandchildren to one of these schools?
at 7:49 PM