Wonder if anyone shared this graphic with the Secretary last week, as she was ostensibly in Jefferson City to pump NCLB. (With the Missouri Senate caving to the ABCTE lobby last evening, who knows what else?) 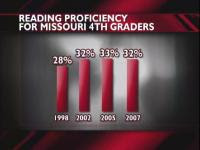 Based on the rate of proficiency gain in reading since NCLB began in 2002, Madame Secretary, Missouri children will never reach 100% proficiency in reading, much less in 2014. What are they smoking, indeed. From KOMU:

JEFFERSON CITY - U.S. Secretary of Education Margaret Spellings was in Jefferson City Thursday to drum up support for keeping the No Child Left Behind Act.

Spellings talked with Missouri education officials about the necessity for children to be able to count and read. She made it clear that she thinks the No Child Left Behind Act is working towards that goal.

"I don't know about you, but I want my child on grade level right now today. Right now today," said Spellings. . . .