Arne's Listening Tour - Do You Believe in Fairies? 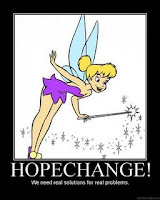 If you believe Arne Duncan is listening, you must believe in fairies so clap twice and maybe all those nasty tests and accountability systems will disappear and teachers will once again be free to actually teach. The no excuses bandwagon has just pulled into the station and parked itself for the next four years right behind W. and Margaret Spellings. Except this time, it's a bandwagon with $100 billion and everyone's got their hands out.

Does he really believe Suzie Orman when she says in the New York Times Magazine that teachers aren't equipped to educate students about finance because they are not empowered? No, it's probably because he thinks they are just stupid - or maybe Duncan is just deaf - perhaps just tone deaf when it comes to teachers on the front lines who are doing the hard work everyday while he shoots baskets with his buddy Obama.
Suzie's take on teachers:

She has been reluctant to work on school curricula on personal finance, because she says students can’t learn empowerment from people who aren’t empowered, and teachers, she says, are too underpaid ever to have any real self-worth. She told me: “When you are somebody scared to death of your own life, how can you teach kids to be powerful? It’s not something in a book — it ain’t going to happen that way.” She once delivered pretty much the same message at an anniversary celebration of a private school — she seems to recall calling the school a “travesty” — and was all but escorted to the door when she was done.

If Duncan was listening to teachers on his tour, which is still going on in another 10 or so states, they why has did his testimony have nothing to do with what the teachers told him on the listening tour?

I listened to the videos that are up on the Ed.Gov website and I also read every word of Duncan's testimony before Congress. That is where he outlined the four pillars of his education reform.

I didn't hear any teachers say "we have to improve the effectiveness of teachers." There wasn't much talk about the need to improve academic standards either, (except from a few clueless teachers who drank the Kool-Aid and are probably too young to remember when education didn't consist of multiple choice tests and canned lessons).

Teachers didn't complain that their states were not committed to fixing problems in their lowest performing schools either. Oh, and last, but not least, there wasn't much talk from teachers about the need for more money to track data through the Data Quality Campaign.

However, I did hear that the schools could use a few more computers plus quite a few really good ideas about how to improve education for students and teachers.

You could take the time to go on line and post your comments at the DOE site along with the other hundreds of teachers - but don't hold your breath because it's already obvious that no one is listening to those underpaid teachers with no self worth.
at 3:20 PM

Email ThisBlogThis!Share to TwitterShare to FacebookShare to Pinterest
Judy Rabin
Judy Rabin has a Master of Arts in Teaching and is a certified high school social studies teacher.