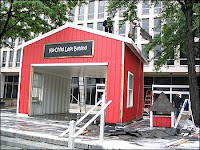 The faux schoolhouse, that has represented the faux education reform drummed up by business leaders and politicians who have left so many children behind, is finally coming down - in a "symbolic" move.

Arne Duncan is now busy rebranding the law because the name apparently has become "toxic." Perhaps he should call Karl Rove to find a new name to push through the new version of NCLB on steroids. This way the public might never notice that it's the same old failed policy.

There's a contest to come up with a new name for the law - hmmm... this should be fun.

Arne Duncan is determined to take us back to an era when the United States was the leader in the global economy. The problem is he just rode in to Washington on the same Trojan horse that Bush and Spellings left behind. If he would stop talking for five minutes and start listening, he might come to realize the gig is up. The image and the reality have become intolerably wide.

I couldn't help but laughing out loud as I read this story from the Washington Post about the little red schoolhouse being removed from the Department of Education because of its symbolism. If the entire thing wasn't so sad, and if the devastation to public school education, the teaching profession and students wasn't so great - this would be quite funny.

The Obama administration has made clear that it is putting its own stamp on education reform. That will mean a new name and image for a law that has grown unpopular with many teachers and suburban parents, even though it was enacted with bipartisan support in Congress."It's like the new Coke.

This is a rebranding effort," said Joe Williams, executive director of Democrats for Education Reform. "The feng shui people believe you need to take the roof off buildings to allow bad chi to escape. Let's hope this helps.

"The 2002 law dramatically expanded the federal role in public schools. It mandates math and reading testing for millions of students and penalizes schools with too many youngsters who fail those exams.During his run for office, President Obama said he wanted to change the law to do more to help schools, "rather than punishing them."

"Toxic or not, is No Child Left Behind headed for extinction? Lawmakers have yet to tackle an overhaul, and Duncan has not offered specifics on how he would like to see the law revamped.

But the administration has said it will not back down from testing students or holding schools accountable. Duncan has said he wants even higher standards that measure U.S. students against peers worldwide. But he said states and schools should have more flexibility in achieving goals.

Like Spellings, Duncan has been promoting charter schools and merit pay for teachers."Other than kind of the aesthetics of it, it's not clear the schoolhouse represents anything more substantial," Hess said.One thing is clear: Federal education law will soon have a new name.

Email ThisBlogThis!Share to TwitterShare to FacebookShare to Pinterest
Labels: Arne Duncan, NCLB
Judy Rabin
Judy Rabin has a Master of Arts in Teaching and is a certified high school social studies teacher.