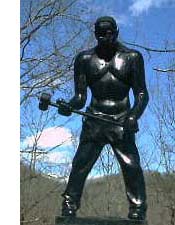 Helena and the Arkansas Delta are demographically almost identical to the Mississippi Delta, and parts of Mississippi are very similar to Helena, Luckett said.

If Mr. Luckett is in neither of the above categories of politicians, surely he won't hesitate to look at the SRI study done last year in five Bay Area KIPP schools, where researchers found that 40 to 60 percent of KIPPsters in the five schools "chose" to leave KIPP between grades 5 and 8, and that most of the students who were ridden out were the low scorers who could have damaged the KIPP brand if they had stayed. Or Mr. Luckett may be interested to know that the five schools from the Bay Area lost 65 percent of their teachers over 3 years. From the SRI study:

Mr. Luckett, I hope you have some plans to build some TFA teacher barracks along the Delta because without a constant re-supply of Ivy League missionaries you will never keep your KIPP chain gangs staffed.

"It points out that you can make a difference with the right set of dedicated teachers and students," Luckett explained. "With a will to learn, you raise the bar and raise the expectations and they've done a tremendous job at the KIPP school. That really sold me on charter schools."

He said that charter schools would only be necessary in regions where the existing public schools have repetitively exhibited underperformance.

"There are great schools in Mississippi, like right here in DeSoto County," he said. "It's not to say that the public school administrations (of underperforming schools) aren't trying to do something, it's to what degree sometimes. I see them attacking the problem and chipping away, but I think it's time for a sledgehammer now. We've got to do something a little more significantly."

Yes, yes, the old sledgehammer. One may wonder what Mr. Luckett has in mind for those children who can't make it in the KIPP mines, the ones who can't carry the tune of "Sixteen Tons," those children of low-production value who are likely to damage the output numbers if they hang around. But, then, Mississippi has another chain gang for those youngsters, one that has been perfected over the past 150 years.